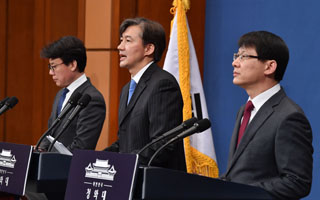 
Senior Presidential Secretary for Civil Affairs Cho Kuk often mentions “citizens.” When he announced the constitutional amendment, he said “citizens” 36 times in 11 minutes. The constitutional revision is also named the “citizens’ constitution.”
Hearing “citizen” so often made me wonder whether there is a unified public sentiment for the revised constitution that can be described as the will and desire of the citizens, as a group or representing the majority.

It certainly does represent citizens’ will but, at the same time, may not in some ways. Those who don’t support the revision could grow. Last week, the National Assembly Research Service published a 100-page report which analyzed several surveys on the constitutional amendment via email. The research service reviewed three opinion surveys commissioned by the speaker of the National Assembly last year and five polls by major agencies from December 2017 to January 2018.

An absolute majority — over 70 percent — said that the Constitution needs to be amended. But when the question was tweaked and asked whether they support or oppose the constitutional revision, the results changed. 75.4 percent said they supported constitutional amendments in July 2017, but 62.1 percent — 13 percent less — supported one in December. The decrease is unusual as supporters of Moon are considered “overrepresented” in surveys due to his high approval rating. The majority responded that the constitutional amendment could be timed for the local election, but when given multiple options, about 30 percent said that they did “not care about the timing” or it’s O.K. as long as the Constitution is revised “within President Moon’s term.”

Respondents still preferred a presidential system, but a considerable number of them favored decentralization. Expanding basic rights got overwhelming supports, but respondents also showed mixed views on the public concept of land.

The report stated that the public opinion of citizens was not fixed, and their views were fluid depending on their beliefs and political inclinations. Politicians must gather the opinions of the public, but the arguments created serve as a critical factor in creating public sentiment.

In fact, the constitutional revision proposed by the president cannot be modified by the National Assembly unlike other bills. Unless the president withdraws, it needs to be accepted or rejected. It is not likely that the National Assembly will pass it. If the Blue House pushes for a constitutional amendment, opposition parties will resist and citizens may be divided.