Picture a Leader. Is She a Woman?

Picture a Leader. Is She a Woman? 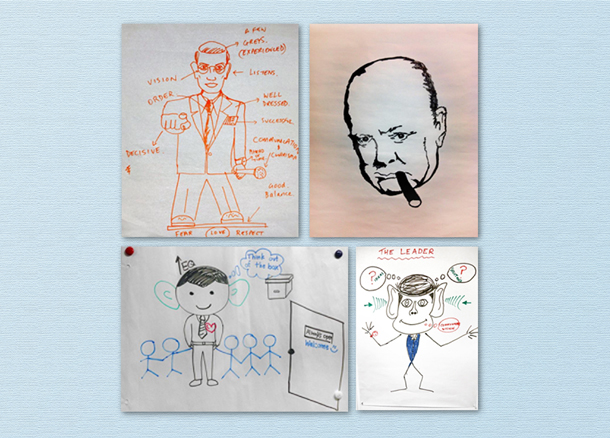 This series of images emerged from a simple prompt: “Draw an effective leader.”

Tina Kiefer, a professor of organizational behavior at the University of Warwick in the United Kingdom, fell upon the exercise accidentally, while leading a workshop full of executives who did not speak much English. Since then it has been adopted by organizational psychologists across the world.

“Even when the drawings are gender neutral,” which is uncommon, Dr. Kiefer said in an email, “the majority of groups present the drawing using language that indicates male (he) rather than neutral or female.” And yet, her clients often insisted that what they meant by “he” is actually “both.”

Several researchers in organizational psychology who have had a similar experience with this exercise decided to investigate further. How might holding unconscious assumptions about gender affect people’s abilities to recognize emerging leadership? What they found, in a study posted by the Academy of Management Journal, seems to confirm what many women have long suspected: getting noticed as a leader in the workplace is more difficult for women than for men. Even when a man and a woman were reading the same words off a script, only the man’s leadership potential was recognized.

The authors focused on one particular act associated with leadership: speaking up with ideas to move a team or company forward.

In one experiment, participants were asked to call into a monthly sales team meeting of a fictional insurance company, during which they would hear from either an Eric or an Erica. Later they were asked to rate the speaker on the degree to which he or she had “exhibited leadership,” “influenced the team” or “assumed a leadership role.”

The Erics who spoke up with change-oriented ideas were far more likely to be identified as leaders than Erics who simply critiqued their team’s performance. But Ericas did not receive a boost in status from sharing ideas even though they were exactly the same as the Erics’.

Life, of course, does not unfold like a scripted call. And in a second experiment, the researchers attempted to investigate the benefits of speaking up in the “wild.” The researchers asked participants in a 36-team skills competition at the U.S. Military Academy at West Point to fill out a series of questionnaires before, during and after their competition.

The authors acknowledged that there were limitations in studying this atypically male-dominated place, but the nature of the competition allowed them to control for athletic ability, cognitive ability and other factors.

Still, after the competition, when participants ranked who they wanted to be the team leader, only the men who had spoken up with ideas received a boost.

“It didn’t matter whether women spoke up 1) almost never, 2) rarely, 3) sometimes, 4) often, or 5) almost always,” Kyle Emich, a professor at Alfred Lerner College of Business and Economics at the University of Delaware, and one of the authors, wrote in an email. “Women did not gain status for speaking up, and subsequently were less likely (much less) to be considered leaders.”

A negative response to female assertiveness — known as the “backlash effect” — has been documented in other studies on gender and leadership.

“I anticipated that we would find that effect,” said Elizabeth McClean, a professor at the University of Arizona’s Eller College of Management and an author of the studies. “But we didn’t.”

So what’s going on here? The researchers believe that results may be related to what you saw in those drawings earlier.

“People have these prototypes in their head about what a leader looks like,” Dr. McClean said. “When we see an individual, we ask, ‘Do they fit that?’” If they don’t — even if they are acting like a leader — it’s harder to identify them as one.

This disconnect does not require assuming that “women are less competent than men in general (e.g., intelligent, smart, organized, levelheaded),” Alice Eagly, a psychologist at Northwestern University and author of “Through the Labyrinth: The Truth about How Women Become Leaders,” wrote in an email. Recently, she has found that many people “tend to credit these qualities more to women than men.”

It’s that the capacity to “take charge,” which is strongly associated with one’s ability to lead, continues to be considered a largely male characteristic, she said.

But Erica was taking charge. Why didn’t anyone see that?

When we “process information through the lens of stereotype” our interpretation may be “consistent with stereotyped expectations rather than objective reality,” said Nilanjana Dasgupta, a professor of Psychological & Brain Sciences at University of Massachusetts at Amherst. When people are consistently exposed to leaders who fit one profile, they will be more likely to notice leaders who fit that same profile in the future. That’s how the self-reinforcing “confirmation bias” cycle works, she said. She added that she would be interested in seeing similar studies on the role of race, something these studies did not investigate.

How can this problem be overcome? One reliable way to help people to see more women as leader-like, she has found, is to expose them to more women in actual leadership positions.

In the article, Picture a Leader. Is She a Woman?, the authors present both research and an activity that shows the difficulty women have getting noticed as leaders.

Women Leadership: Were you surprised by the article and the findings that women have a more difficult time getting noticed as leaders? Do you have any other solutions to this problem?

Other Similarities: Take a look back over the drawings that were provided in the article. Besides gender, what other similarities are there between the drawings?