Governance gets a shake up at corporate AGMs

Governance gets a shake up at corporate AGMs 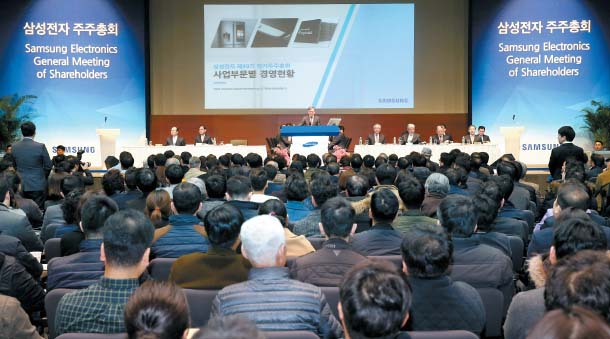 More than 500 companies listed on the stock market held their annual shareholder meetings on Friday. Among the big players, Samsung Electronics and KT both used the meetings to push through major changes to their corporate governance.

The leading electronics manufacturer highlighted its will to share earnings with shareholders this year. The company has seen record-high sales of 239.6 trillion won ($220.4 billion) and an operating profit of 53.6 trillion won.

A major change approved by the leading electronics manufacturer’s shareholders was the 50-to-one stock split. This will drop the trading price on the Kospi from nearly 2.5 million won to 50,000 won, making it more affordable for smaller investors. Samsung Electronics was traded at 2,486,000 won per share as of Friday.

Trading of Samsung shares will be halted for three trading days starting from April 30. The newly split stocks will be listed on May 4.

“Most Samsung Electronics shares were traded by institutional investors whereas it was more difficult for small investors,” said the company’s CEO Kwon Oh-hyun who led Friday’s meeting. “We decided to split the stock so that more investors can take away dividends.”

He later added that Samsung will focus on increasing dividends as a way to share profits with stakeholders. The company plans to give back 10 trillion won this year.

Heir apparent Lee Jae-yong did not attend the general meeting. There was speculation that Friday’s event might be his first official appearance since his release from prison last month. Lee was imprisoned for nearly a year on bribery charges and is still under probation. He has maintained his position as a director and board member.

“The separation will further empower the board of directors and enhance its independence,” said Kwon. “The board will be able to evaluate the company’s performance more objectively and have greater authority and efficiency as a decision making body.”

At mobile carrier KT’s meeting on Friday, shareholders voted to change the CEO appointment system to further distance the company from government interference.

KT used to be a state-run corporation before 2002, and has often had former state officials with no real management background in the private sector appointed to its leadership.

Until now, KT CEOs were selected from a list of candidates chosen by a “CEO recommendation committee.” This body was comprised of one internal and multiple external directors. The board of directors would vote from this pool.

However, the revision of this policy adopted at Friday’s meeting will allow the board of directors to select CEO candidates, while the committee will only help with the evaluation process. Corporate experience was also added to the assessment criteria. Requirements for external director appointment were reinforced as well.

“The essence of the policy change was to enhance independence and transparency in the selection process for CEOs and external directors,” KT said in a statement.

Meanwhile, members of KT’s new labor union protested against KT President and Board Chair Hwang Chang-gyu outside the meeting. This smaller union of 20 to 30 members has been requesting Hwang’s resignation regarding his alleged involvement in a KT slush fund offered to politicians in 2014 — a case currently under investigation. The union opposed the changed governance system, saying that the change does not enhance the board’s independence from management.

Among other notable company that held a general meeting was Lotte Group. Convicted Chair Shin Dong-bin was re-appointed as an internal director for two of the group’s core affiliates — Lotte Shopping and Lotte Confectionery. His older sister Shin Young-ja was not put to vote to prolong her term as director at Lotte Shopping, as she voluntarily offered to resign from the position earlier this month. She was ruled guilty of embezzlement last year.