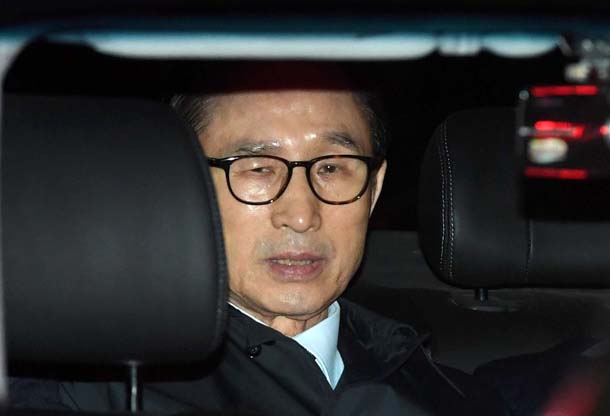 Former President Lee Myung-bak is driven to a detention center on Thursday at midnight. The Seoul Central District Court issued a warrant to detain Lee on Thursday night. [YONHAP]

Korea now has two former presidents detained over corruption allegations after former President Lee Myung-bak was arrested on Thursday night. He was taken to a different detention center in Seoul from where former President Park Geun-hye is jailed.

“One day, I hope I will be able to say what I want to say,” Lee wrote on his Facebook account shortly after the detention warrant was issued around 11:05 p.m. Thursday. “I will pray for the country.”

Picked up by prosecutors in front of his house in Nonhyeon-dong, Gangnam District, southern Seoul, around midnight Thursday, Lee was jailed in a solitary cell at Seoul Dongbu Detention Center in Munjeong-dong, southern Seoul.

Lee, who served as president from 2008 to 2013, is Korea’s fourth former president to be detained on corruption charges. His successor Park is also behind bars for corruption and power abuse allegations, facing a prison sentence that could extend up to 30 years. Former presidents Chun Doo Hwan and Roh Tae-woo were detained in 1995 for mutiny and corruption allegations.

Lee’s aides have told media outlets that he may boycott the trial if they try to extend his detention. Lee is to be detained until March 31, though the prosecution can request an extension to April 10.

If Lee does boycott the trial he will be following in the footsteps of Park, who has been boycotting her trials since Oct. 16. The Seoul Central District Court will announce her sentence on April 6.

Lee already boycotted the hearing for the detention warrant earlier on Thursday. Seoul Central District Court Judge Park Beom-seok made the decision without a hearing after reviewing documents from prosecutors and Lee’s lawyers.

“The prosecution provided enough grounds for many parts of the charges,” Judge Park said. “There is a risk of evidence destruction taking into account the status of the suspect, graveness of the charges and the circumstances revealed during the investigation.”

The charges against Lee are wide ranging. He faces at least 18 charges of receiving bribes from businessmen and politicians, misappropriating secret operations funds from the country’s main spy agency and generating a slush fund using a company registered under his family’s name.

The prosecution’s warrant application listed precise figures for the bribes that Lee allegedly accepted and the money that he allegedly embezzled. “We wanted to make sure accurate numbers are used before a possible indictment and trial,” a source from the prosecution told the JoongAng Ilbo.

According to the warrant application, Lee accepted over 11.18 billion won ($10.43 million) in bribes. Some figures were quoted in U.S. dollars since they involved payments to an American law firm. Prosecutors decided to use the exchange rate at the time of the transaction to determine the won amount in the warrant application.

Prosecutors believe Lee received over 6.77 million won from Samsung Electronics in the form of legal fees for a company that he allegedly owned. DAS, an auto parts maker technically owned by Lee’s brother but allegedly run by Lee, was involved in a lawsuit in the United States to retrieve an investment in a failed venture.

Samsung allegedly paid a firm $125,000 a month from November 2007 to November 2011 to represent DAS. The majority of those payments were made while Lee was president, allegedly in return for the pardoning of the Samsung chairman, who at the time was convicted of tax evasion.

At DAS, prosecutors suspect Lee created a slush fund worth 33.9 billion won, adjusted down from previous media reports of 35 billion won. Together with his wife, Lee is believed to have embezzled an additional 34.8 billion won from the company.

It also said Lee’s son, Lee Si-hyung, embezzled some 472 million won from the company. The younger Lee, an executive at DAS, was questioned by the prosecution last month on the corruption allegations surrounding the family and the company.

“I have no right to face you. You have worked overnight to build the country, yet I have brought troubles,” Lee said, according to an aide. “What more can I do if this is my destiny.”

Lee reportedly read his statement, the same that he posted on his Facebook account, aloud to his guests.

“Right now, I feel a guilty conscience and I should be blamed for everything, instead of blaming other people,” Lee wrote. “I worked hard to end the wrongful practices of the past and carry out clean politics, but there are shortcomings if today’s standards are used.”

He added that he had suffered unbearable pain over the past 10 months, and his family and aides also suffered. “I hope my detention will ease the pains of my aides and family.”

Some aides said that his family broke down in tears while Lee read his statement.

“When we couldn’t tell him anything, Lee actually smiled and tried to keep the conversation going,” said an aide. “I have never seen him so at ease.”

The prosecution decided not to question Lee on Friday, a decision likely to have been reached because they thought the 77-year-old would need some rest after being arrested in the night. Park was not questioned for four days after she was detained.

Lee is detained in a 13.1-square-meter (141-square-foot) room on the 12th floor of the Dongbu center, which is furnished with a folding mattress, blanket, small table, TV, bookshelf, toilet and sink. Lee is the only person detained on the 12th floor of the building. Like any other detainee, upon arriving at the center Lee filled out a registration form and went through a simple health check up, took a shower, changed into a prison uniform and took a mug shot with his prisoner number 716 on his lapel.

His breakfast on Friday was bread, jam, soy milk and salad. Lee is said to have finished most of it.