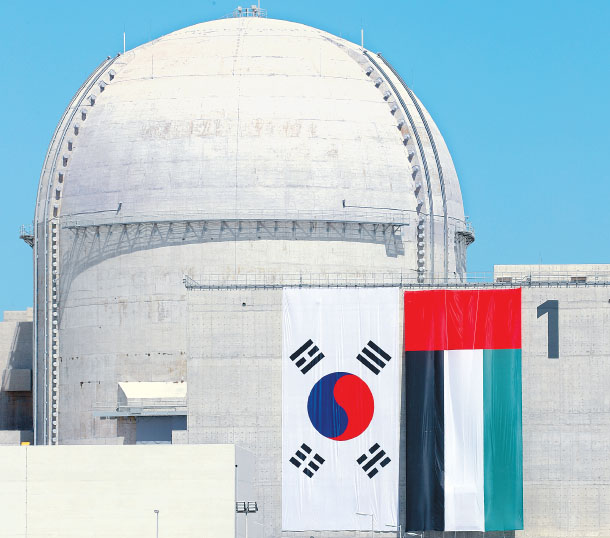 Korea and the United Arab Emirates (UAE) decided to strengthen ties in industry and energy, agreeing to exchange expertise and technology in fields such as semiconductor and nuclear energy.

According to the Ministry of Trade, Industry and Energy, Minister Paik Un-gyu signed a number of partnerships with his counterparts from the Arab nation during his visit from March 25 to 26. Paik visited the UAE as a member of the delegation that accompanied President Moon Jae-in.

One of the first partnerships that Paik signed was a memorandum of understanding to exchange and train experts in the semiconductor industry.

“Korea will cooperate to develop a semiconductor education program for the UAE and provide on-site training for UAE students in Korea,” said the Trade Ministry in a report. The Korea Semiconductor Industry Association also created a partnership with Mubadala Technology, a principal investment firm from the UAE that focuses on the semiconductor industry, to expand business opportunities and networking among Korean and UAE chip companies.

Private Korean companies that visited the UAE along with Moon and Paik also landed contracts with local companies there.

During the visit, Samsung Engineering, an engineering and construction arm of Samsung, inked two contracts with Abu Dhabi National Oil Company (Adnoc), a state-owned oil company, to renovate an existing oil refinery plant and build facilities that can process waste heat to produce electricity and water. Both projects will take place at Ruwais oil refinery, some 230 kilometers (143 miles) west of Abu Dhabi, and are worth about $3.1 billion all together.

“Adnoc has a long and successful history of working with Korean companies as partners in our concession areas, as contractors for our major projects, and as a customer of our crude oil and refined products,” said Sultan Ahmed Al Jaber, UAE Minister of State and Adnoc Group CEO, according to a press release by the company. “The award of two major Engineering, Procurement and Construction contracts reinforces the strong business relationship that exists between the UAE and Korea.”

Moon and Sheikh Mohammed bin Zayed bin Sultan Al Nahyan, the crown prince of Abu Dhabi, visited the plant on Monday for its grand opening ceremony. The deal with Kepco E&C is estimated to be worth about $400 million.