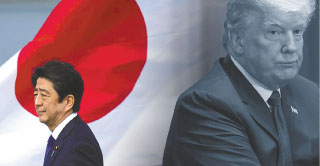 “I’ll talk to Prime Minister Abe of Japan and others — great guy, friend of mine — and there will be a little smile on their face. And the smile is, ‘I can’t believe we’ve been able to take advantage of the United States for so long.’ So those days are over.”

U.S. President Donald Trump made the above statement as he signed an import restriction on steel and aluminum on March 22. He specifically mentioned Abe, and Japan is shocked. Unlike Korea and the EU, Japan was left off the exemption list for the steel tariffs. Foreign minister Taro Kono personally visited the United States to no avail. On the restriction, Trump said imports of steel threatened national security. In effect, Japan, an ally of the United States, was called a security threat.

In addition to the steel tariff, Abe suffered a more painful blow from the United States. According to Japan’s Kyodo News Agency, Foreign Minister Kono met with U.S. officials in mid-March and asked that North Korea’s abandonment of its mid-range missiles program and the resolution of the Japanese abductee issue be preconditions for a U.S.-North summit. However, Secretary of State designee Mike Pompeo and other top officials considered the request unrealistic. Prime Minister Abe and the Japanese government are speechless after praising the U.S.-Japan alliance, saying the two countries were “unprecedentedly close in history” and 100 percent together.

Abe is facing his worst political crisis due to the ongoing school scandal. President Trump shook off Abe’s desperate calls twice. Trump’s politics strictly distinguishes friendship from national interests and prioritizes his election victory above all else. Abe must be devastated after treating Trump dearly and enduring the shameful fall at a golf course in November.

The summits in April and May will determine the fate of the Korean Peninsula. With China’s “Emperor Xi” and Russia’s “Tsar Putin” reinforcing their authority, the Korean Peninsula has become a stage for strongmen with new weapons to show off their power.

There are no eternal allies and no perpetual enemies in international politics, and as Korea is in the driving seat, what we need now is thoroughness and composure unaffected by emotion.

The author is the head of the JoongAng Ilbo Japan.