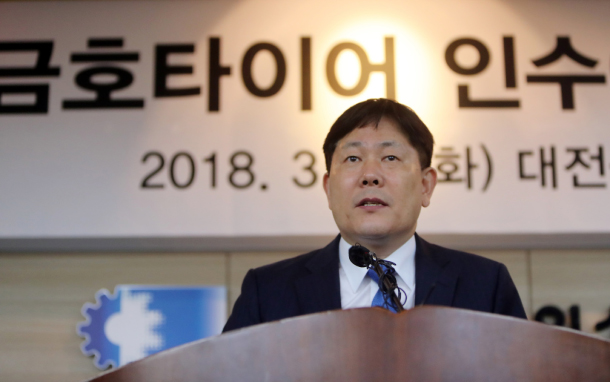 Kim Jeong-gyu, chairman of tire retailer Tire Bank, announced his last-minute bid for Kumho Tire with just three days left before the final fate of the tire manufacturer is sealed.

Kim’s decision to step in as the white knight that the tire maker’s union has been looking for was motivated by patriotism.

“It really doesn’t matter whether Kumho Tire goes under court receivership or if there’s a breakthrough [in negotiations] from the current situation,” Kim said. “[But] we can protect our national pride when a Korean company takes over a Korean company.”

“I have decided to go forward with the acquisition as I couldn’t sit back as a Korean company looking at the Kumho Tire acquisition problem failing to be resolved,” Kim said. “A huge scar would have lasted for a long time on the heart and pride of the [Korean] people if all of the plants in Korea were sold to China’s Doublestar.”

The tire retailer chairman said he will be securing the finance needed to buy a stake of Kumho Tire by either listing Tire Bank on the stock market or offering the creditors of his company as collateral.

He also said that two foreign companies - which aren’t Chinese - have expressed interest in bidding for Kumho Tire with him.

Kim said that while the current purchase of Kumho Tire is focused on local plants, Tire Bank may also buy the company’s plants in China.

Kim said he has not met with the tire company’s union or had any discussions, but he will convince the union workers to support the acquisition.

The union workers of Kumho Tire, who have been strongly opposing the sale to an overseas company, welcomed Tire Bank’s interest.

The union argued that it would be inappropriate for creditors, led by the state-owned Korea Development Bank, to deny a bid by a Korean company or file for court-ordered restructuring if the current deal with Doublestar breaks down.

However, there are doubts as to whether Tire Bank has the financial capacity to buy the 45 percent stake of Kumho Tire, which Doublestar offered 646 billion won ($600.8 million) for.

Additionally, Kumho Tire has 2 trillion won of debt to its creditors due to mature at the end of this week. The loan maturity, which has already been extended from the end of last year, is unlikely to be extended further.

If creditors were to accept Tire Bank’s proposal, the acquisition process would need to start all over again. Kumho Tire, already on borrowed time, likely won’t last the two or three months that would take, according to the KDB.

KDB President Lee Dong-gull on Monday said if Kumho Tire’s deal with Doublestar breaks down and the company goes into court receivership, it is most likely to be liquidated rather than be revived through restructuring.