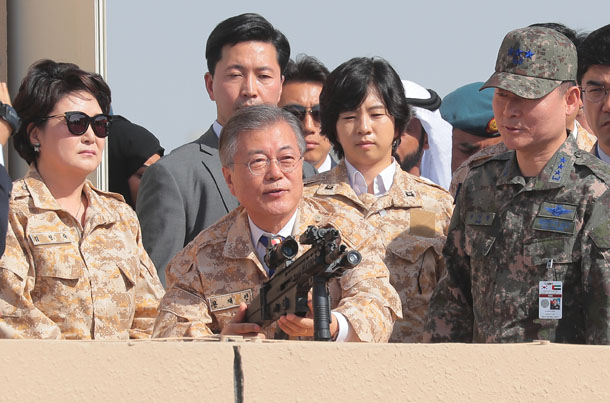 President Moon Jae-in, second from left, and Kim Jung-sook, the first lady, to his right, tour the Korean Akh unit in Abu Dhabi on Tuesday. The president and first lady greeted soldiers and shared a meal with them on the last day of his trip to the United Arab Emirates. [YONHAP]

President Moon Jae-in wrapped up his trip to the United Arab Emirates (UAE) on Tuesday with a visit to Korean troops stationed in the capital city of Abu Dhabi and a meeting with business executives in Dubai.

Moon thanked the 150 Korean soldiers serving in the Akh unit, named after the Arabic word for “brother.” Korea first deployed the unit in January 2011 to help train the UAE’s special forces during peace time and protect Korean residents there in times of contingency.

After meeting with Korean troops in Abu Dhabi, Moon traveled to Dubai to meet with Sheikh Mohammed bin Rashid Al Maktoum, prime minister of the UAE and ruler of the Emirate of Dubai, and attended a signing ceremony for Korea’s participation in the World Expo in the city in 2020.

Moon also delivered a keynote speech at the Korea-UAE Business Forum and attended a luncheon with executives from both countries before returning to Korea.

The president’s stop in Dubai concludes a seven-day diplomatic trip that included Vietnam and the UAE.

In Vietnam, Moon met with President Tran Dai Quang. The two leaders agreed to increase bilateral trade to $100 billion by 2020, up from $63.9 billion in 2017, and hold routine summits to strengthen cooperation.

Moon also offered an apparent apology to Vietnam for Korea’s participation in the massacre of civilians during the Vietnam War.

“While we continue to develop a cooperative relationship, I express my regrets for the unfortunate history between the two countries that remains in our minds,” he said.

Quang expressed gratitude for what he called the Korean government’s genuine efforts to “correct its past wrongs.”

After Vietnam, Moon flew to the UAE, his first Middle Eastern destination since he took office.

His visit was mired in controversy over a secret military deal that his administration inherited from one of his predecessors.

Kim Tae-young, who served as defense minister under President Lee Myung-bak, told the JoongAng Ilbo in January that a secret military pact was signed in 2009 before the UAE awarded an $18.6 billion nuclear power plant contract to Korea.

The pact purportedly formed the Akh unit in return for the nuclear power plant contract, and the UAE had reportedly been skittish about whether Moon would continue to honor it.

The two leaders also discussed ways to expand their economic cooperation. Al Nahyan promised to award $25 billion worth of new petroleum and gas projects to Korean companies, the Blue House said Tuesday. While no specific projects were assigned, the crown prince told UAE officials during the summit to assure that the amount would go to Korean firms, Blue House officials said.

Moon and Al Nahyan also attended a ceremony on Monday to mark the completion of the first nuclear reactor built by Korea in the UAE.