Secret North Korean visitor to Beijing could be Kim Jong-un

Secret North Korean visitor to Beijing could be Kim Jong-un 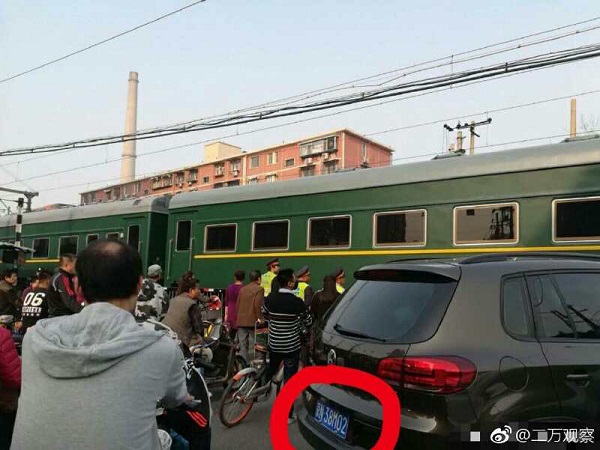 A North Korean train arrives in Beijing on Monday amidst media reports that the country’s leader Kim Jong-un or another high-ranking official is visiting the Chinese capital.[YONHAP]


Media reports about a visit by a top-level North Korean official to China dominated the local news Tuesday, raising questions of whether it was North Korean leader Kim Jong-un.

No official confirmation of who was leading the North Korean delegation was made as of press time Tuesday, but many wondered if it was Kim. If so, it would be his first known trip outside North Korea since taking charge of the Communist country in December 2011, when his father, Kim Jong-il, died.

And it would signal a warming in Beijing’s attitude toward Kim. His father was a regular visitor to the Chinese capital but Kim has never been invited.

“We are closely watching the situation in Beijing while keeping every possible scenario in mind,” said a senior Blue House official speaking on the condition of anonymity.

The official added that a sign of improved relations between China and North Korea, which had been frosty in recent years despite the latter’s heavy economic dependence on its Communist ally, was a “positive sign” ahead of planned summit meetings between the two Koreas in late April and between Kim and U.S. President Donald Trump subsequently.

The Foreign Ministry in Seoul said it couldn’t confirm details about the secret North Korean visit, and added that the Chinese government has in the past announced details of such high-profile visitors at a time it deemed appropriate.

Reports of Kim Jong-il’s visits to China were usually made only after he had returned home to Pyongyang.

Reports about the top-level North Korean visitor to the Chinese capital surfaced late Monday after pictures of a vintage-style, green North Korean train — like the one used by the late Kim Jong-il — arriving in Beijing on Monday circulated online.

A heavy Chinese security presence in the city and a military honor guard welcoming a convoy of vehicles at the Diaoyutai State Guesthouse, which has hosted top North Korean officials in the past, bolstered suggestions that it was Kim Jong-un leading a delegation.

The timing of the visit also coincided with a visit made by Kim Jong-il 18 years ago.

A month ahead of the first landmark summit meeting between leaders of the two Koreas in June 2000, the late Kim visited Beijing and met with then-President Jiang Zemin.

Kim Jong-un will meet President Moon Jae-in in late April — the specific date has not been determined — in Peace House on the southern side of Panmunjom, making him the first North Korean leader to cross the border to the South.

Kim Yo-jong, who serves as the first vice director of the Central Committee of the North Korean Workers’ Party, was sent to South Korea as a special envoy last month for the PyeongChang Winter Olympics opening ceremony and met with President Moon four times in a three-day visit.

“Just as his father Kim Jong-il visited Beijing ahead of the 2000 summit meeting to coordinate summit moves, it is likely that it is Kim Jong-un who is in Beijing now,” Yoo Ho-yeol, a professor of North Korea studies at Korea University, told the Korea JoongAng Daily on Tuesday.

“If Kim Jong-un made the trip, Kim probably will have or already had a meeting with Xi Jinping to deliver his direct message. Kim will probably tell Xi his plan for the summits with Moon and Trump and ask for China’s close cooperation in guaranteeing his regime’s survival in exchange for giving up a nuclear arsenal,” continued the professor.

He noted that Xi probably had advice for Kim for the upcoming summit between Kim and Trump, which will be the first-ever such talk between the two countries’ leaders.

Chung Seong-chang, a senior fellow at the Sejong Institute specializing in North Korea affairs, agreed that it was Kim Jong-un who made the trip, not his younger sister.

“Never before have North Korean officials used that special train [seen in Beijing] except for Kim Jong-il,” said Chung.

“As North Korea will have an inter-Korean summit in April and the Pyongyang-Washington summit in May, amid a worsening economic situation affected by international sanctions, one country that the North most urgently needs to mend fences with is China,” Chung continued.

If Kim meets Xi in Beijing, it would be his first meeting of a foreign leader since he took power in late 2011.

The two leaders could agree to improve relations and put an end to years of ties strained by North Korea’s continuing pursuit of nuclear and intercontinental missile technology despite Beijing’s objections.

In a punitive move, Beijing voted in favor of rounds of United Nations Security Council resolutions aimed at stripping its Communist ally of hard-won foreign currency.