Hyundai Motor Group will resolve its complicated cross-shareholding structure, increasing the role of Hyundai Mobis to take on a holding company role in an effort to make the business more transparent and profitable.

Korea’s second largest conglomerate by market capitalization has been under fire from the Moon Jae-in government since last year to resolve the complicated web of cross-shareholding relationships among its affiliates.

The current cross-shareholding structure gives more power to the owner Chung family and allegedly promotes internal trading at the expense of shareholders’ money.

The Fair Trade Commission had ordered the chaebol to come up with a restructuring plan, and the deadline was set for the end of March.

According to the company Wednesday, Chairman Chung Mong-koo and Vice Chairman Chung Eui-sun will sell their stakes in Hyundai Glovis, totaling 30 percent, to Kia Motors and other affiliates.

The two top executives will then buy shares of Hyundai Mobis, an affiliate of Hyundai Motor and Korea’s biggest auto parts maker, from Kia Motors, Hyundai Glovis and Hyundai Steel, increasing their total stake to 30.3 percent and effectively turning the auto parts manufacturer into a holding company.

“[Chung Mong-koo and Chung Eui-sun] will manage Hyundai Mobis responsibly and Hyundai Mobis, as a leading future technology company, will suggest a comprehensive direction for future mobility,” said the company in a statement Wednesday. 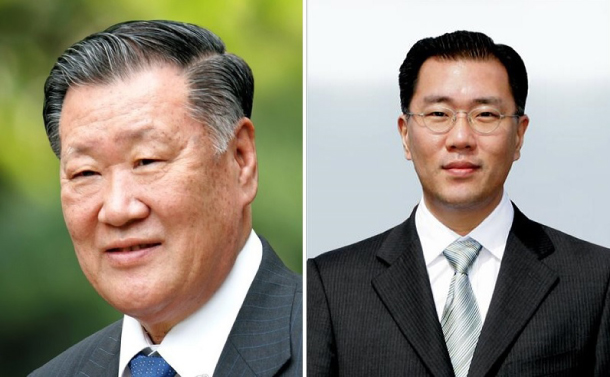 “[The direction will be delivered to] Hyundai Motor and Kia Motors, who will then manage diverse businesses including future mobility services, logistics, after-service, powertrain, material and financial departments,” the company added.

In the process of selling off their stake in Hyundai Glovis, Chung Mong-koo and Chung Eui-sun are expected to pay more than 1 trillion won ($930 million) as transfer income tax.

The transfer income tax rate imposed on selling stocks that exceeds 300 million won in total edged up from 22 percent to 27.5 percent starting this year. “Hyundai Motor Group decided to face the management restructuring issue with standard tactics to emphasize the controlling shareholders’ determination to roll out social responsibility,” the company said.

“They did not use cheating methods in their effort to return the credibility that Koreans have shown for the company,” it added. The ownership restructuring will begin in July.

As a result of the merger, Hyundai Mobis shareholders will receive 0.61 of a Hyundai Glovis share for every Mobis share that they hold.

The restructuring will enable Hyundai Mobis to concentrate on developing future mobility technology such as autonomous and connected vehicles, the group said.

“Such a business reshuffle will enable speedier decision-making at Hyundai Mobis. The stable profit made from manufacturing core auto parts as well as investing in overseas corporations will help the company secure more competitiveness,” the company said. “Hyundai Mobis’ stance within the group affiliates will be promoted to a whole new level,” it added.