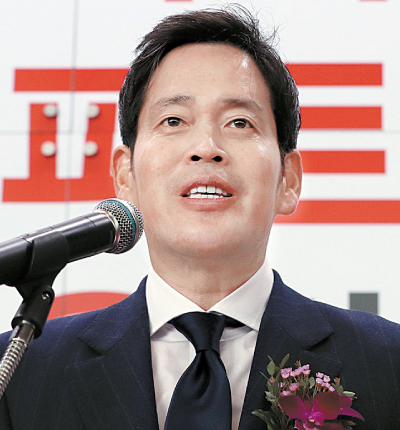 Shinsegae plans to launch its premium grocery store PK Market in the United States by May next year, the retail giant’s first proper foray into the U.S. market.

“Our goal is to launch PK Market in the United States by May next year,” said Shinsegae Group Vice President Chung Yong-jin during a Q&A session held Wednesday at the Shinsegae Group & Partners Job Fair in COEX, southern Seoul. “The plan is to present a wide array of Asian food that would cater to American consumers’ tastes.”

Chung added that the company will start launching branches on the West Coast including in Los Angeles, aiming for a target audience similar to Whole Foods Market.

Apart from Korean food, PK Market in the U.S. will also stock Japanese, Chinese, Thai, Indonesian and Vietnamese food that can be prepared at cooking stations inside the store. This so-called “grocerant concept,” a portmanteau of grocery and restaurant, has been a feature of PK Market since the launch of the first store in Starfield Hanam in Gyeonggi.

The retail conglomerate has exported products to the U.S. before but PK Market will be its first store there. During his meeting with the local press, Chung expressed a will to expand to markets like the U.S, Australia and Europe which he said have “fewer regulations.”

Shinsegae has established Emart branches abroad, but recent expansions have mainly been focused on Southeast Asian countries. The company pulled out of the Chinese market last year after seeing operating losses there for four years.

Chung also mentioned the retail giant will invest in a 30-story building that will act as the distribution center and hub of Shinsegae’s online business. In January, the group attracted more than 1 trillion won ($930 million) from overseas equity firms to establish an affiliate that would solely concentrate on online businesses.