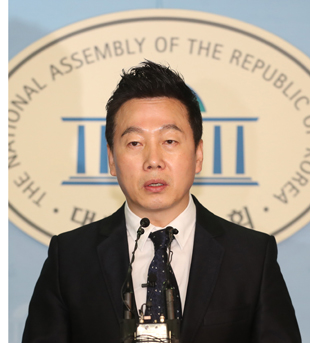 Chung Bong-ju, a candidate for Seoul mayor who rose to prominence as a staunch critic of former President Lee Myung-bak, withdrew from the mayoral race on Wednesday and announced his retirement from politics, making him the latest figure to fall amid Korea’s growing Me Too movement.

Earlier in the day, Chung admitted to being in the same hotel as a woman who accused him of making unwanted sexual advances in 2011, backing away from an earlier claim that he was never there in the first place.

The former lawmaker, however, made no mention of the allegations against him. “Though it may sound like an excuse, I have no recollection of what occurred that day,” Chung said in a statement Wednesday.

Payment records show that he used his credit card at 6:43 p.m. on Dec. 23, 2011, at a cafe in the Lexington Hotel, now the Kensington, in Yeouido, western Seoul. It is the same night that his accuser says Chung forcibly hugged and tried to kiss her in a private room at the cafe.

Until the discovery of the transaction, Chung claimed he was never in the hotel that day. His absence was the basis for his defense in a defamation lawsuit against Pressian, the online news outlet that broke the story of his sexual misconduct.

After the payment record was revealed Wednesday, Chung promptly dropped the lawsuit. In a brief statement on his Facebook page, he said he would “wrap up all public activities,” withdraw from the mayoral race and retire from politics “in repentance.”

In his statements Wednesday, Chung neither denied nor acknowledged the allegations against him, but the payment record lends credibility to his accuser’s claims of sexual misconduct and raises questions about Chung’s story.

His account has changed in the past few weeks since Pressian first broke the story on March 7. A local reporter, who continues to remain anonymous, went to the outlet with claims that Chung hugged and tried to kiss her in a private room at a cafe in the Lexington Hotel when she was a college student in 2011. The woman said she first met Chung in November 2011 at a campus event where he was giving a lecture.

The story was published hours before he was supposed to announce his candidacy. Chung canceled the event 10 minutes before its scheduled start.

Two days later, Chung issued a sternly worded denial, calling the Pressian report a “public scam” that was “politically motivated.” He then sued Pressian for defamation.

Chung’s supporters went after the accuser and media outlet, raising theories about possible political motives and insisting that Chung had fallen prey to one-sided reports that lacked evidence of wrongdoing.

The turning point came on Tuesday, when Chung’s accuser held a news conference with her lawyers and disclosed her check-in history on the mobile app Foursquare, which showed pictures of her waiting at the cafe at 5:05 p.m. and 5:37 p.m.

The evidence forced Chung to reveal his payment records and acknowledge that he was also there.

Chung was considered a formidable challenger to the incumbent mayor, Park Won-soon. As a lawmaker in the National Assembly, he built his reputation as a crusader for the truth and critic of the country’s political right.

In 2011, he was convicted of spreading false rumors about former President Lee while Lee was running for office in 2007. On his political podcast, Chung alleged that the presidential candidate committed stock fraud.

As part of his punishment, Chung served a year in prison and was barred from running for public office for 10 years. The sentence cemented his image as a darling of the political left.