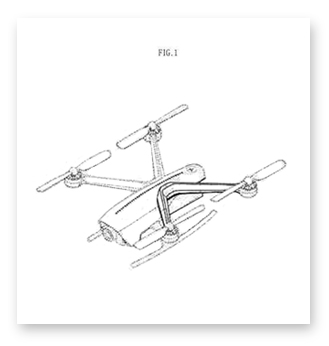 An image of one of two drone-related patents Samsung filed with the United States Patent and Trademark Office. [YONHAP]

Samsung Electronics might be getting into the drone industry as it was found to have registered two patents related to the devices with the United States Patent and Trademark Office this month.

According to the U.S. patent office website and industry sources, Samsung Electronics won two patents related to drone designs on March 13 and 27. One of the submitted designs shows four wings on top of a long body and what seems to be a ski on the bottom.

The approval of patents does not mean that Samsung will be manufacturing drones soon, industry analyst say, but it does signal the IT giant’s research and development experiments in diverse products.

“It seems Samsung Electronics is going for such patent acquisitions thinking that such a high-tech industry can always spark a fierce competition among global players,” an industry insider said.

“It is known that Samsung Next, an investment arm for potential start-ups, is also paying great attentions to drone-related firms recently,” the insider added.

Samsung Electronics had shown interest in drones since 2016, when it applied for multiple patents related to drones both in Korea and the United States.

Global IT giants like Apple, Google and Amazon have staked out claims in the burgeoning industry, merging artificial intelligence and autonomous car technology with drones to develop so-called smart drones, which can be used for deliveries, security and aerial photography.