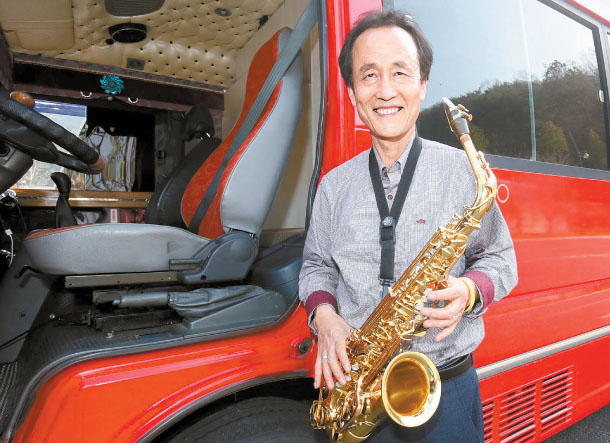 Kim Seung-sik, a retired teacher, plans to travel the country in a red camper van, playing his saxophone and promoting reunification of the Korean Peninsula. [JANG JEONG-PIL]

He collected some savings - about 40 million won ($37,600) - and bought a red camper van. His lofty goal: to travel the country with a saxophone and karaoke machine advocating reunification of the Korean Peninsula.

Starting next month, Kim plans to visit 17 cities around the country. By August 2022, he surmises the entire country will have heard his message about the importance of reunification.

“I’ve installed portable solar panels above the bus for long-term travel,” Kim said, “All I need to do is leave.”

The spark came after Kim watched a reunion of families divided by the 1950-53 Korean War on television. Parents who had not seen their children for decades touched their adult faces for the first time. Siblings who were separated by war embraced each other in tears. They consoled each other, not knowing whether they would be able to see each other again. The poignant scene moved Kim. He wanted to help.

He reached out to institutions that advocate reunification and started collecting as much information on the issue as he could. “I don’t have any grand purpose,” he said. “I just want to let others know that now is the time to become united beyond the tragic history of separation.”

The retiree acknowledged that the younger generation is largely skeptical about reunification, but he stressed that the pain of separated families alone was enough to justify the need for reunification. “We now live in a world where we can go wherever we want,” said Kim. “But it’s really distressing that parents and their children and siblings can’t meet each other.”

Kim hopes to start his four-year journey on April 9 from his hometown of Gangjin, South Jeolla. He plans to spend about three hours in each city.

“The starting point is South Jeolla and then I will move on to North Jeolla,” he said. “After that is Gyeongsang and Jeju Island. I will then move up to Chungcheong, Gyeonggi and Seoul, heading to Gangwon.”

He plans to win the hearts and minds of people with his saxophone performances - and a lot of coffee. Kim has equipped his camper van with an espresso machine.

“I’m not a reunification expert,” he said, “but if more people recognize the issue, the days of unification will come sooner with the eased geopolitical relations that we see now.”