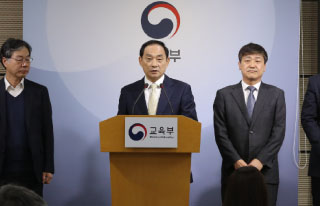 When Michelle Rhee, at the time the chancellor of District of Columbia public schools, was featured on the cover of Time magazine holding a broom in December 2008, some people were not very happy. Teachers interpreted the broom to imply that she planned to fire teachers. The assumption was correct — Rhee fired more than 200 teachers.

Her public-school reform was controversial as she closed down under-performing schools and evaluated teachers based on student’s grades. She was called both an evangelist of public school reform and a merciless witch. It was an example that shows the influence of the chancellor on the direction of local education.

The situation is similar in Korea. The chancellors, or superintendents, are the head of elementary and secondary schools in cities and provinces and have extensive authority over budget, HR affairs and building new schools. At elections for 17 municipal and provincial chancellors on June 4, 2014, 13 progressive figures were elected, and some were shocked. With progressive chancellors taking a majority, they predicted that changes to the educational scene were inevitable.

The problem with progressive chancellors is ideological confrontations. Because of various ideologies and philosophies, policies on eliminating or reducing autonomous private high schools or expanded the standardization of high schools are not consistent. Not much has changed with the local election slated for June 13. Mokpo University professor Ko Seok-gyu, who is the head of the committee investigating the state-authored history textbook, declared his candidacy for Seoul education chancellor after announcing the results of his investigation. He claimed to be a “sponge” who incorporates conservative views based on his progressive educational perspective. We need such a practical stance to revive the education trapped in factional discords. But his promise sounded empty, as I could not help feeling that he used the investigation results to help his election campaign. The position of chancellor is not easy for someone who believes in principles.