After 50 years of steel, Posco is ready to try something different

After 50 years of steel, Posco is ready to try something different 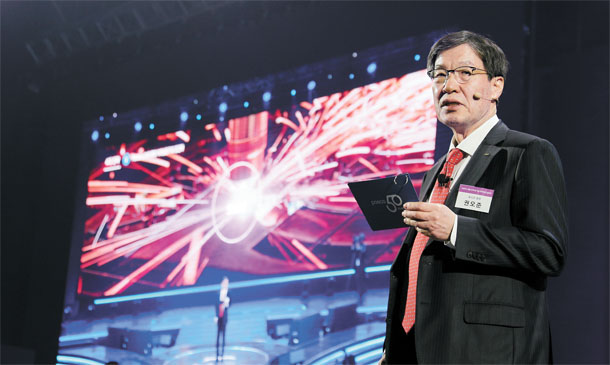 Korea’s largest steelmaker Posco is turning to lithium production and biopharmaceuticals as it looks to diversify its business to massively increase profit over the next half-century.

Celebrating its 50th anniversary on Sunday, the steelmaker laid out ambitious goals to reap in 500 trillion won ($471 billion) in revenue by the time it reaches its one-hundredth birthday, more than eight times the 60.7 trillion won sales it recorded last year.

In terms of operating profit, the company said it hopes to make 70 trillion won by 2068, about 15 times more than the 4.62 trillion won it posted last year.

Posco’s decision to diversify its businesses comes at a time when oversupply has made steel trade increasingly difficult, especially after U.S. President Donald Trump showed he is willing to turn against U.S. allies in an effort to protect the country’s steel industry.

“The world is changing and we can’t just depend on steel for growth,” said Kwon Oh-joon, CEO of Posco, at a meeting with reporters on Saturday. “You have already witnessed the recent trade issues and it’s not easy for us to expand the markets for steel whether at home or abroad.”

Though Kwon stressed that the steel business will remain a main pillar of the company as it has already built up know-how and a competitive edge in steel manufacturing, the percentage of the company’s revenue taken up by the metal is expected to drop significantly from 80 percent now to about 40 percent over the next few decades, according to Posco in a statement.

Kwon said that lithium production is “the largest future cash cow for Posco” at the briefing.

The company’s lithium business took a blow last week after a Korean TV program attacked the company, claiming it had made no real progress in production of the chemical despite years of continued investment. Kwon hit back on Saturday, saying most of Posco’s investment in the past has been focused on research and development of lithium extraction technology and the company only began to commercialize that technology from last year.

Kwon did say “Posco has tried a number of mergers and acquisitions in the past but not all of them went very well,” but still showed confidence that the lithium business will have some visible outcomes from now on.

Posco developed its own technology to extract lithium from saltwater in 2012, greatly reducing the time it took to extract the chemical from 12 months to less than three months and increasing the extraction rate from less than 50 percent to 80 percent. After extracting lithium phosphate from saltwater and dead batteries, the company converts it to lithium carbonate, which is a primary material used in rechargeable lithium-ion batteries.

Posco visited countries with highly-concentrated saltwater such as Chile, Argentina and Bolivia over 10 times in the past five to six years to secure the resources to extract lithium, according to Kwon, however contracts have been falling apart as lithium prices soared after it became clear that it is a core material to power electric vehicles.

“Chinese companies would also approach our partners and bid twice as much for [saltwater], making it harder for us to secure saltwater to start lithium businesses,” Kwon said.

Still, Posco has been making some progress in its lithium business after setting up a lithium carbonate production facility by its Gwangyang steel mill in South Jeolla in February last year. The plant is capable of producing 2,500 metric tons of lithium carbonate, enough to make batteries for roughly 70 million laptops, according to the steelmaker. For the facility, Posco is using lithium phosphate from companies recycling dead batteries.

In February this year, the Korean steel company agreed to buy up to 240,000 metric tons (264,554 tons) of lithium concentrate per year from Australian miner Pilbara Mineral in exchange for a 4.75 percent stake in Pilbara for $62.49 million and the same amount in convertible bonds. The Australian company is planning to begin production of 300,000 metric tons of lithium concentrate in the second half of this year.

Just last month, Posco also won a bid in Chile to build a factory for cathode materials, one core component of electric car batteries, in a consortium with battery-maker Samsung SDI. The Chilean government promised a long-term supply of lithium at a low price to companies that build manufacturing facilities in the country for value-added products that use lithium.

Posco is also working on producing other materials like nickel and magnesium in pilot tests. The company says it will soon reveal plans regarding those materials as well.

While Posco’s new love for lithium was already well known, its interest in biopharmaceuticals is quite new.

Research in bio has made great progress thanks to Posco’s affiliated university Pohang University of Science and Technology, founded by Posco founder Park Tae-joon in 1986.

The university has a fourth generation light source accelerator or synchrotron radiation facility, which helps researchers analyze cells more accurately than any previous accelerator. There are only five such accelerators in the world and Korea became the third country to have one in 2016, paving the way for growth in Korea’s bio technology.

“The university also has an abundant pool of researchers dedicated to bio research and we plan to turn patents developed by the professors into business,” Kwon said. The CEO said a new business model could be born by coupling the university’s expertise in bio research and Posco’s know-how and infrastructure for big data analysis and manufacturing.

Kwon, however, said the steelmaker is not looking into developing new drugs as it takes too much investment and resources and the company lacks the technology to jump into that area. He said he’s thinking of a business model similar to Samsung BioLogics, which concentrates on contract manufacturing drugs.

As well as the relatively new business areas, Posco will also bolster its existing businesses in construction, energy and IT solutions, grouping them under “infrastructure.” The company is hoping to make use of recent technology advances to make construction and energy management smarter and is testing a smart factory platform at its Pohang steel mill.

While the company has announced a 4.2 trillion won investment plan for this year, Kwon said about 2.5 trillion won will be spent on renovating steel mills to ramp up competitive edge in its main business. The rest will be used to develop new business areas with lithium as the largest beneficiary.

Though the company has laid out ambitious plans, there are a couple of obstacles it needs to overcome first.

The Korean government made a deal with Trump to exclude Korea from worldwide 25 percent tariffs on steel imports to the United States, but an existing quota would limit steel exports from Korea to roughly 70 percent of the average in 2015 through 2017.

“In terms of trade issues, Korea often stands on the weak side,” Kwon said. “I think it is important to cooperate with the government in solving trade conflicts.”

As an independent company, Posco said it has recently set up an office for lobbying in Washington as trade friction continues to be a burden on Korean steelmakers.

Posco has already been reducing exports to the United States to less than 2 percent of its total exports largely due to the anti-subsidy tariffs it was hit with about two years ago. Kwon emphasized that companies should be persistent and continue to negotiate with trade partners in order to make better deals.

Another issue is political influence. Posco was originally a state-run company before it was privatized in 2000, and the appointment and departure of company heads still tends to be impacted by the administration in office.

Kwon, appointed in 2014 during the conservative Park Geun-hye administration, managed to take office for another term, until 2020, but there have been doubts regarding whether he will survive through the liberal Moon Jae-in administration and stay in office.

On these doubts, Kwon said, “This is something I cannot control and I think the best I can do is manage the company based on transparent and fair principles.”