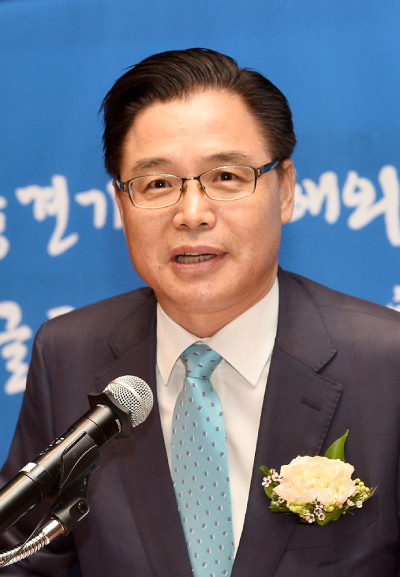 The new chief of the Korea Trade-Investment Promotion Agency vowed to help 5,000 small businesses export their products every year and create 20,000 new jobs for Koreans both at home and abroad.

Kotra’s new leader Kwon Pyung-oh said in his inaugural ceremony on Monday that his main task is to help small and medium-size enterprises go global and create more jobs.

“Expanding Korean exports through key items from a small number of large conglomerates has reached its limit,” Kwon said. “The best option we have to increase exports and create more jobs is helping innovative SMEs go global.”

According to Kwon, only 2.6 percent of Korean SMEs have exported their products or services. That percentage is 5.2 percent in the United States and 10.9 percent in Germany.

To ramp up exports from smaller Korean companies, the new head is planning to reform the organizations under Kotra to better address the needs of SMEs. Details of the support plan will be finalized by the end of this month after meetings with employees, labor unions and outside experts, and Kotra will begin executing the new plan next month.

Kwon hopes expanding SMEs’ exports will create more jobs, and said that he regrets that Kotra’s past support for smaller companies didn’t focus on job growth.

While exports from SMEs account for 37 percent of total exports from Korea at the moment, Kotra said that a million new jobs will be created if that percentage is raised to 50 percent.

To enhance Kotra’s role in supporting trade, Kwon said he plans to cut the amount of employees at its headquarters by about10 percent. Kwon plans to send them to foreign trade offices or other regions of Korea to better communicate with SMEs based outside of Seoul.

Until last month, Kwon served as the ambassador to Saudi Arabia after working as the chief of the trade promotion division at the Ministry of Trade, Industry and Energy from 2013 through July 2015. Most of Kwon’s career has been spent working on trade and commerce after he joined the government in 1984.