In ‘Stand by Me,’ the kids aren’t all right

In ‘Stand by Me,’ the kids aren’t all right 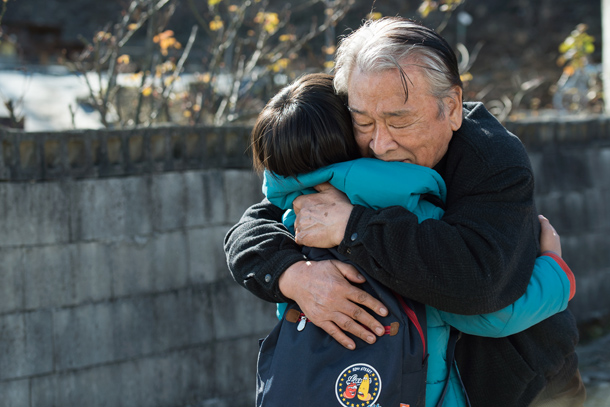 “Stand by Me,” starring veteran actor Lee Soon-jae, is a heart-warming drama about a grandfather and his grandchildren.

Director Bang Su-in’s debut feature “Stand by Me” is a resonating drama about the love of a dying grandfather (Lee Soon-jae) for his two grandchildren: Deok-gu (Jung Ji-hoon) and his younger sister Deok-hui (Park Ji-yun).

After his Indonesian daughter-in-law attempts to run away with his dead son’s life insurance money, the grandfather - who is never named in the film - throws her out and takes full responsibility of his grandchildren. Though he has trouble providing the kind of food and toys his grandchildren crave, the old man does his best by working demeaning jobs, like washing grills at a barbeque restaurant.

But that isn’t enough to fill the vacuum in the hearts of the two children created by the absence of their mother. Watching their friends at schools being picked up by their mothers after class, Deok-gu and Deok-hui blame their grandfather and treat him with disdain. In one scene, Deok-gu is forced to take Deok-hui on a school trip while his grandfather is working. During the picnic, they quietly observe other children being fed by their mothers’ dishes with sophisticated flavors, an embarrassing contrast to the humble dishes like kimchi and bean sprouts prepared by their grandfather.

The major turning point in the plot comes when the old man realizes he will soon die of lung cancer, and tries to find people who could raise his grandchildren when he is gone. One of them is his daughter-in-law, who turns out to have had a particular reason to steal the life insurance money. 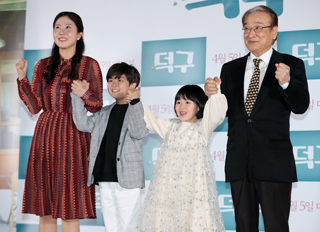 Though the drama sheds light on vulnerable people in society, like the financially struggling old man and the Indonesian widow, the director doesn’t resort to stereotypes. Instead, the film flows naturally, focusing on the relationship among its characters and highlighting the value of family.

“Taking care of the socially vulnerable like children and seniors is a responsibility for all of us,” said the filmmaker during a press event in central Seoul last week. “But not many people seem to undertake that responsibility these days. I wanted to show a world in which what should be done isn’t.”

Regarding his choice of a multiethnic family, Bang said, “In Korea, where racial discrimination is serious, I wanted to deliver some hope to those children from multiethnic families and to tell them, ‘You’re not different from us.’”

As touching and well-meaning the story is, however, it isn’t difficult to find flaws in the movie. It continuously implies how a mother’s absence could severely affect children while it barely touches on the role of a father in parenthood. In one scene, in which Deok-hui is hospitalized after swallowing a handful of laminated flooring paper, the doctor tells her grandfather, “The girl needs a mother,” and explains that a grandfather can never replace a mother in raising children no matter how hard he tries.

Gender stereotypes in the film can also be seen in how the children are dressed. While Deok-hui is mostly dressed in pinkish hues, Deok-gu normally wears blue. The severity of the gender stereotype in the film is highlighted when Deok-gu is told by his grandfather, “Someone with a penis shouldn’t shed tears.”

Backed by splendid acting from the young actors, “Stand by Me” is generally a pleasant drama with a heartwarming plot. Veteran actor Lee hits all his marks and 10-year-old Jung particularly impresses with a bold but non-exaggerated performance. Though Park doesn’t have many lines in the film, she successfully arouses viewers’ emotions through her delicate yet ingenuous facial expressions.

Rated G, the feature will be released on Thursday. It runs for 91 minutes.