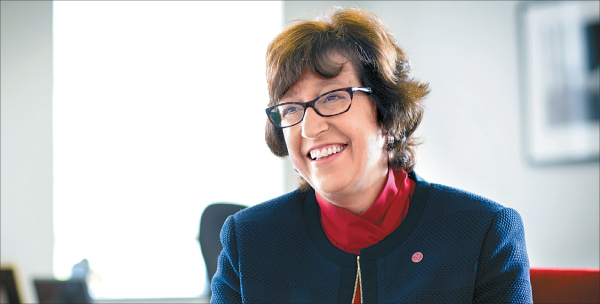 Bill Gates, Steve Jobs, Elon Musk and Mark Zuckerberg are billionaire tech superstars, household names and the inspiration for a generation of entrepreneurs. Another interesting thing they have in common - they are all college dropouts.

For ambitious college students hoping to be the next big thing in business, taking a leaf out of the billionaire playbook may seem like a tempting option. The rise of robots and artificial intelligence also poses a difficult question: Can schools really prepare students to stay competitive in a digital world where the value of human resources is constantly changing?

For Martha E. Pollack, Cornell University president and a computer scientist specializing in artificial intelligence, there is no question that a university education is as important as ever in a world of tech billionaires and computer coworkers.

“We need to provide our students with the kinds of skills that will not be part of a robot’s or advanced AI system’s repertoire, at least in the foreseeable future,” she said. “I’m thinking of skills like cultural awareness, the ability to communicate and work across differences, the ability to speak and write with clarity and persuasiveness, and very high-level critical thinking.”

The Korea JoongAng Daily spoke with Pollack before her visit to Korea to meet Cornell alumni tomorrow. Appointed last April, she is the second female president of the Ivy League school. Below are edited excerpts of the interview.

Q. This is the first time in 11 years a Cornell University president has made an official visit to Korea. What brings you here?

A. During this first year of my presidency, I felt it was important for me to get to know Cornell’s worldwide alumni body, not just when they visit our campuses, but also in key locations around the world.

Korea was high on my list. More than 1,200 Cornell alumni are active members of the Cornell Club of South Korea. Students from Korea represent the 4th largest international student population at Cornell among 115 countries, with 375 students from Korea enrolled at the university this academic year; we also have 53 visiting scholars from Korea at Cornell this year.

Cornell has memoranda of agreement with 17 institutions in Korea, and Cornell faculty, students and staff are involved in numerous projects with Korean collaborators.

A separate Cornell Tech Campus opened on Roosevelt Island next to Manhattan last year. More universities are expanding their programs to cater to the needs of aspiring entrepreneurs, but some of the most famous tech entrepreneurs are college dropouts. Is entrepreneurship something that can be learned through a college education?

The importance of the second stems from the fact that no problems are purely technical: if you don’t get the human dimensions right, you’ll never have a successful solution. To be a good entrepreneur, you need to understand what the customer wants even if the customer doesn’t yet know it; that, in fact, was the brilliance of Steve Jobs and other tech gurus.

Finally, universities have, within the past few decades, begun to offer focused programs, with lots of hands-on training, in how to “think” like an entrepreneur.

Cornell, for example, runs the program “Entrepreneurship at Cornell” for participants from every college and every field. We offer e-hubs on campus where students can work on developing their entrepreneurial ideas, making them real. All master’s students at Cornell Tech engage in the studio curriculum, where student teams develop a product or service in response to strategic business challenges posed by real companies. So far, 41 startup companies have been formed at Cornell Tech.

Local surveys show that a lot of Koreans are afraid of the so-called Fourth Industrial Revolution. They are concerned that AI-powered robots and advanced technology will take their jobs. As an AI scientist and educator, what do you think of this?

Like most successful technologies, artificial intelligence has the capacity to do great good, as well as the potential for great harm, including having negative impact of jobs. Historically during period of technological advance - during industrial revolutions - some forms of work have become obsolete, and this has led to job loss, while new technologies also ultimately led to the creation of jobs that weren’t even previously conceivable. But the period of disruption certainly can be problematic, and we should be planning now for the disruption that is and will be caused by AI technology.

Study of the future of work is something that universities should be taking seriously. In our role as university educators, we need to provide our students with the kinds of skills that will not be part of a robot’s or advanced AI system’s repertoire, at least in the foreseeable future.

I’m thinking of skills like cultural awareness, the ability to communicate and work across differences, the ability to speak and write with clarity and persuasiveness, and very high-level critical thinking. Interestingly, these are exactly the skills that one obtains with a liberal arts education. Our students certainly need advanced technical skills to engage effectively with a digital world, but the importance of these other skills cannot be denied.

In the United States and throughout the world, we are discovering that most problems are not purely technical. They are socio-technical; indeed humano-socio-technical. The challenge for all of us, I think, is to foster a compelling synergy between the liberal arts and professional study. There is no one way to do this, but efforts to engage students with what they are learning are yielding promising results.

For example, at Cornell we have an Engaged Cornell initiative under which faculty members and students partner with outside organizations to devise knowledge-based solutions to real-world problems, with the students producing a reflective paper on the experience as their final project.

You are a computer scientist and Cornell’s second female president. Women in science, engineering and academia are still somewhat under-represented in Korea. You reached a prominent position in both fields. Can you describe your career?

When I started my undergraduate work at Dartmouth, the ratio of male to female students in my class was 3:1, which was somewhat uncomfortable for me at barely 17 years of age. But it was good preparation for my later work in computer science, where the ratio was 10:1. Later in my career, I joined the computer science faculty at the University of Michigan, and discovered that there were more faculty in that department named “Igor” than there were women on the faculty - in fact, I was the only one.

Things are indeed changing. The first-year undergraduate class in our College of Engineering this year is 51 percent female. As a woman in a STEM field, I think this is very encouraging.

In fact, the very first doctoral thesis committee that I served on was for Paek Eun-ok, now a professor of computer science at Hanyang University in Seoul with research interests in bioinformatics and artificial intelligence. She received her PhD from Stanford in 1991 after graduating from Seoul National University and I was an outside member of her committee. She was the first of many women whom I’ve had to pleasure to work with, and provide counsel to, throughout my career to date.

Throughout my time at academia, I have cared deeply about issues of diversity, engaging in committees that work to increase the status and representation of women faculty in science, technology, engineering and math fields and to improve the climate in which they worked.

From such activities, I learned a lot about implicit bias, which over decades or centuries had led to only some groups of people playing certain roles.

Here’s an example: In the 1970s, the top five U.S. symphony orchestras had only 5 percent female musicians. If you haven’t seen many female symphony musicians, at a subconscious level you may not tend to think of women as symphony musicians. But by the end of the 20th century, the proportion of women in major symphonies was up to 25 percent. The thing that changed was having musicians audition behind screens so that only their skill, not their gender, could be discerned.

When you focus on the actual performance of the candidate, rather than stereotypes, it makes it much harder to fall back on implicit biases. As more and more candidates from certain groups are successful in their new positions, implicit bias becomes less likely as well.

Lastly, as an academic and artificial intelligence expert, do you envision a day when your job might be threatened by AI technology?

While I don’t believe that AI will threaten the job of university presidents any time soon, because the job requires the higher order skills we discussed earlier, I do see advanced AI technology leading to evidence-based strategies for improving teaching and for determining what each individual student needs to be successful. Learning analytics have great potential to improve education in STEM and many other fields.