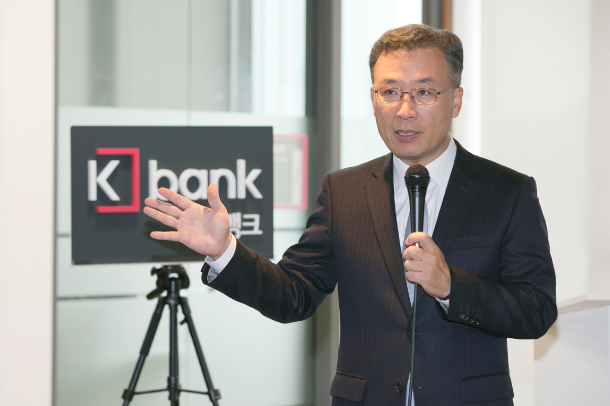 K bank, Korea’s first internet-only bank, celebrated its one-year anniversary on Tuesday and announced ambitious plans for next year. But K bank may face some headwinds, including a possible reining in by the Financial Supervisory Service (FSS), whose new governor is known to disapprove of internet-only banks.

During its first year in operation, K bank attracted more than 700,000 customers and raked in more than 1 trillion won ($947.5 million) in deposits, 200 percent more than its goal for the year. The bank issued some 1.3 trillion won in loans, about 40 percent of which went to borrowers with mid-to-lower credit ratings of 4 to 7 out of 10.

After an undeniably successful debut, the bank said it will introduce a number of new services, including international money transfers, which the bank claims will be much easier than at traditional banks. The bank will also introduce mortgages that can be applied for via mobile devices and even on weekends.

“We were able to have a soft landing [in the local banking sector] thanks to our customers, who trusted K bank in the past year,” said Shim Sung-hoon, president and CEO. “We will come up with more innovative products and improve our services to give our customers a more convenient financial experience.”

“Any business needs a certain level of capital in order to increase profitability,” Shim said. “If we can increase our capital [more easily], not only will we be able to come up with new products but we will also be able to aggressively bring in more customers and get on a fast growth track.”

But Shim admitted it’s difficult to raise additional capital because of regulations and said the bank would be able to shorten the process if its main shareholders could hold larger stakes in the bank. The current version of the banking act in Korea, a law intended to separate banking from commerce, makes it impossible for non-financial companies such as KT to hold more than 10 percent of the shares in a finance company. KT holds an 8 percent share of K bank.

The appointment of Kim Ki-sik as head of the FSS lessens the likelihood of the law becoming more flexible.

“We are counting on the statement the governor made that he will see things with a new perspective as thehead of a regulatory body,” said Shim.