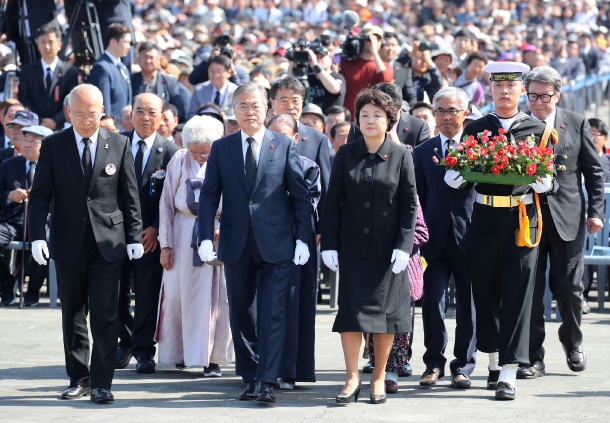 President Moon Jae-in and his wife Kim Jung-sook, center, attend a ceremony in Jeju on Tuesday marking the 70th anniversary of a government crackdown on the island’s residents. Moon, the first head of state to attend the event in a decade, apologized to families of victims who were killed by government forces during the crackdown and renewed his pledge to uncover the truth behind the tragedy, retrieve the remains of those still missing and provide compensation from the state. [YONHAP]

President Moon Jae-in offered an emotional apology to the people of Jeju on Tuesday for the government’s violent crackdown on the island’s residents during the politically tumultuous years following World War II.

Tuesday marked 70 years since the first shots were fired in what has become known as the Jeju uprising. On April 3, 1948, police clashed with island residents who protested elections that were to be held exclusively in the southern half of the Korean Peninsula.

“Seventy years ago today in Jeju, innocent civilians were sacrificed in the name of ideology,” President Moon said before 15,000 people gathered at the 4.3 Peace Park, a memorial site on Jeju Island.

“Even those who knew nothing about ideology, those who could live in a town free of thieves, beggars and leave their houses with doors unlocked were massacred not knowing what they had done wrong.”

Moon, a liberal, directly held authorities at the time accountable, calling the act a “massacre.”

“I bow my head in heart-felt apology as president for the suffering inflicted by state-orchestrated violence and express my deepest gratitude for the efforts by those,” he said.

Moon’s visit to Jeju is significant because he is only the second president to commemorate the anniversary. The last head of state to attend such an event was Roh Moo-hyun in 2006.

Discussion of the Jeju Island incident was taboo under the military governments of Park Chung Hee and Chun Doo Hwan from the 1960s to ’80s. Their administrations insisted that the crackdown was instigated by communist activists threatening to undermine the government.

After World War II ended decades of Japanese colonial rule, Korea was divided between supporters of the United States and allies of the Soviet Union.

In 1948, an election was scheduled for May 10 to form a constitutional assembly on the southern half of the Korean Peninsula, which was occupied by the U.S. military.

The northern half, which would ultimately become North Korea, was controlled by the Soviet Union.

Jeju, which fell under the jurisdiction of the southern half, faced a growing anti-election movement led by the South Korean Labor Party. The provisional government saw the uprising as a threat and deployed troops to the island to quell resistance.

In 2014, the government released a report concluding that the protests “had been described, without any concrete evidence, as a communist rebellion aimed at ‘communizing’ Jeju Island and the whole Korean Peninsula, according to instructions coming from the Soviet Union, North Korea or the headquarters of the South Korean Labor Party.”

Many conservatives in the country still hold that the uprising was instigated by antigovernment forces and believe the military did what it had to do to defend the provisional government.

“To this day, the language of hatred and confrontation spurred by such worn-out ideology is still rampant in the country. From now on, we must look back on our painful history squarely.”