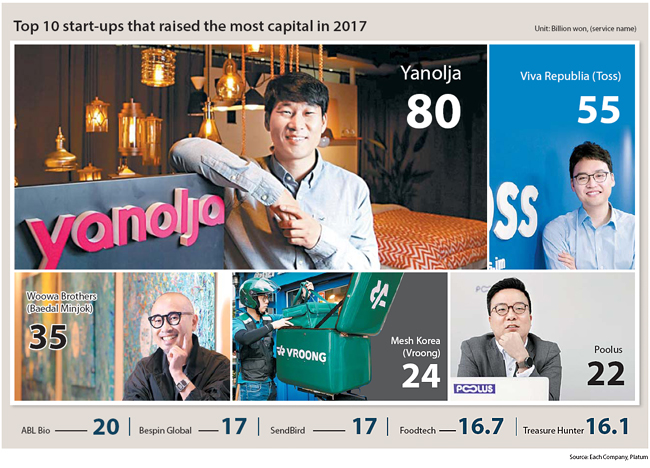 Investors are increasingly interested in Korean start-ups, with funds nearly doubling between 2014 and 2017, according to data from the Korean Venture Capital Association on Tuesday.

Despite more capital across the start-up industry, however, investors are more hesitant about pouring huge sums into a single start-up.

The top 10 start-ups raised a total of 302 billion won last year, according to data from each start-up and reports from Platum, a media outlet that specializes in start-ups. The figure was 80 billion less than 2016’s 384 billion won. In 2015, the top 10 start-ups accrued 1.49 trillion won, and in 2014, 1.18 trillion won. No Korean start-up has reached unicorn status, or valuations of $1 billion or more, since Japanese conglomerate SoftBank invested $1 billion in online retailer Coupang in 2015.

“It’s unfortunate that start-ups in Korea are raising less capital than in China, where individual companies can raise trillions of won in just two years,” lamented Lim Jung-wook, head of Startup Alliance.

Second on the list is Viva Republica, creator of peer-to-peer payment app Toss. PayPal, Goodwater Capital and Altos Ventures are just some of the colorful names that decorate the list of investors who poured a total of 55 billion won in capital into the company. In February 2015, Toss became the first mobile app to offer an authentication-free money transfer service. By last November, the ground-breaking app attracted 6.5 million accumulated users and recorded over 1 trillion won in monthly transfers.

“We invest in companies that help promote our core projects,” explained Naver’s principal manager Kwak Dae-hyun, “This year, we will expand investment in companies that use artificial intelligence.” Naver will equip its AI technology in motorcycles and delivery management systems to facilitate order fulfillment.

Last year, Naver and Woowa made a joint investment of 16.7 billion won in Foodtech, which offers restaurants a convenient way to receive, organize and deliver orders. Foodtech made it to this year’s top 10 list at number nine.