Sabre rattlers are still best in the world

Sabre rattlers are still best in the world 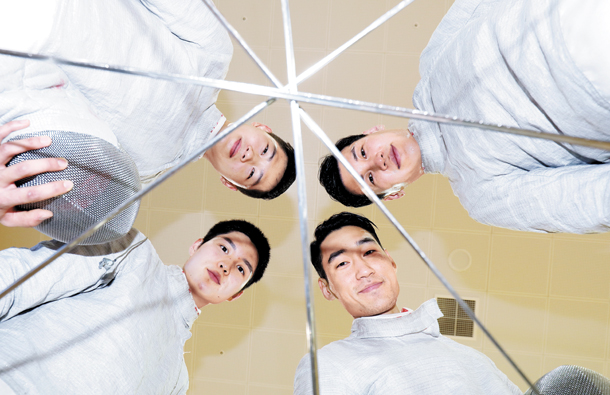 Despite enjoying a brief spell in the spotlight after Korea won a surprise gold in men’s team sabre at the 2012 London Olympics, fencing has slowly faded from the memory of local fans. But although the sport has fallen out of the headlines, the team has continued to dominate, topping the world ranking since the 2016-17 season.

“You don’t get additional point for showing artsy-fartsy skills,” said fencer Kim Jung-hwan. “In Korean fencing, there are no artsy-fartsy tricks. The Korean men’s sabre team got to the top because we stuck to the basics.”

The Korean men’s sabre team consists of Kim Jung-hwan, Gu Bon-gil, Kim Jun-ho and Oh Sang-uk. The team has topped the world ranking since the 2016-17 season, winning the 2017 Asian Fencing Championship and the 2017 World Championship in Liepzig, Germany.

Not only is the team on top, the individual rankings of the four fencers have made a big jump. Gu is the world No. 1, while Oh is sixth, Kim Jung-hwan is tenth and Kim Jun-ho is 19th.

The gold in the men’s team sabre at the 2012 London Olympics was certainly unexpected - Korea was the lowest ranked team among the eight participating countries in the event. At the time, Gu and Kim Jung-hwan competed as a team along with Won Woo-young and Oh Eun-seok, who are both now retired.

Rather than fancy skills, Korea surprised the world with their fast footwork, dominating the matches by literally staying one step ahead of the opposition.

“We were just happy to participate [at the Games], but we had an unexpected result,” Kim Jung-hwan said.

Despite the impressive achievement, the team wasn’t able to continue their stride in international events after the Olympics.

“When Won Woo-young and Oh Eun-seok left the team, we struggled for a while,” Kim Jung-hwan said. “For the next one to two years, we weren’t even close to winning a medal. But once Sang-uk and Jun-ho joined the team, we’ve been winning. We have gained the confidence that we can win at any event that we compete in.”

“My coach in high school was younger than Jung-hwan,” Oh said. “But Jung-hwan is like a brother. I don’t feel the generation gap.”

Though Oh is the youngest member on the team, recent results suggest that he is the rising star of Korean fencing. In December, Oh won gold in an individual event at one of the World Cup events in Mexico and a Grand Prix event in Hungary. Not only that, he won the Korean Fencing Federation’s player of the year award. Standing at 1.92 meters (6 feet 3 inches), Oh’s height helps him dominate European fencers.

“Sang-uk has outstanding physical presence and speed,” Kim Jung-hwan said. “He still needs to improve his game management skill. My goal before retirement is to make him a world class fencer.”

Among the Korean fencers, Gu has maintained the top spot in the world ranking for the longest time. Along with Kim Jung-hwan, Gu has achieved a grand slam, winning gold at the Olympics, World Championship, Asian Games and the Asian Championship.

If Gu wins gold in the individual event at the Asian Games in August, he will become the first fencer in Korea to win it for three consecutive times, but he is more focused on winning the team event than the individual.

“I don’t have much ambition in [winning] the individual event,” said Gu. “I want our younger players to feel the thrill of winning gold in the team event, which I felt when I was the youngest player on the team.”

In team events, Oh is the last fencer in the order.

“Normally, the last player is the team’s ace,” said Kim Jung-hwan. “At the semifinals game against the United States during the World Championship, we were a point behind but Sang-uk successfully brought back our lead. I believe that he can do a great job this time as well.”

However, when competing in individual tournaments, the four fencers have to face each other. Oh said that Gu and Kim Jung-hwan are the players he wants to avoid the most, while the veterans said it’s never easy to face their teammates.

“Since we know each other too well, we can’t really predict who will win,” Kim Jung-hwan said.