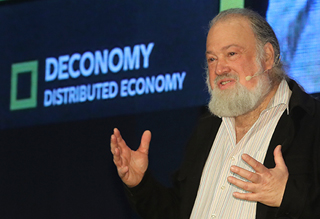 David Chaum, an American computer scientist and cryptographer who is famous for developing ecash, makes a speech at an international forum on distribute economy at Grand Walkerhill Seoul hotel on April 3. [YONHAP]

Before we know it, dispersion and sharing are all around us. Daesin Finance Building in the shopping district of Myeong-dong in downtown Seoul has offices that look like a combination of reception rooms, conference rooms and break rooms on every floor. They are “hot desks,” where employees work in any empty spot they can find in the open area.

Other offices have glass walls instead of partitions. Many of them are start-ups like Block Media, but foreign companies like Airbnb and major Korean companies like Amorepacific also have offices there to create a business eco-system. I spotted many young people moving from one place to another with their laptop computers, as many companies did not have designated desks or are one-man operations.

The owner leased 10 floors of the building, from the seventh to the sixteenth floor, to WeWork, a multinational office sharing company. In less than two years in Korea, WeWork has five locations in busy districts across Seoul. By the end of the year, it is expected to have nine locations. WeWork has established a global network of offices in 160 buildings in more than 50 cities.

The business model might not sound feasible, but WeWork is now valued at $20 billion as a dignified member of the “decacorn league,” private companies valued at more than $10 billion. Sixteen comapnis recently joined the club, including car sharing companies like Uber and Didi Chuxing, and most of them are network firms with no manufacturing plants.

SK, the third largest conglomerate in Korea, is experimenting with sharing and collaboration in a Korean version of WeWork. The 35-story SK building in Seorin-dong, central Seoul, near Myeong-dong is being renovated to remove partitions and designated desks. SK Chairman Chey Tae-won is to provide collaboration space for a social enterprise he sponsors.

The sharing economy is the other side of the coin to the distributed economy, or deconomy. Once platforms of logistics, lodging, office work, file storage or currency are created using information and communication technology, thirsty entrepreneurs flock in and stay active without any supervisory or intermediary agencies. At the Deconomy 2018 international symposium in Grand Walkerhill Seoul hotel on April 3 and 4, panels had a heated discussion on cryptocurrency — the biggest issue in distributed economy. Cryptocurrency had a rough time in the first quarter, but experts engaging in the discussion and the audience seemed unaffected by the “end of cryptocurrency” myth.

However, the forecast for cryptocurrency is “cloudy.” IT industry insiders are uncomfortable with suspicions of the financial industry — especially the central banks that issue legal tenders. Authorities are preparing regulations because of speculation, bubbles, financial instability, leaking of national wealth, money laundering and investors’ despair. Blockchain technology is certainly useful, but its offspring cryptocurrency is unreliable for now as a means of payment. The Bank of Korea’s director of financial settlement Cha Hyun-jin advocates the uselessness of cryptocurrency. “It is like paving a runway before making an airplane, and calling the truck moving on the runway an airplane.”

Korea Electric Power Corporation, the equivalent to a central bank for energy, became a target of the distributed economy. It came under attack because of the logic that nuclear and thermal energy generation is not safe or environmentally friendly and is centralized. Environmental groups are promoting solar energy generation in individual houses and direct trade of electricity.

Do you like blockchain and a nuclear phase-out because they are practical or just? Things gets complicated when the distributed economy claims to be a standard of political correctness.

*The author is the CEO of JoongAng Designworks.