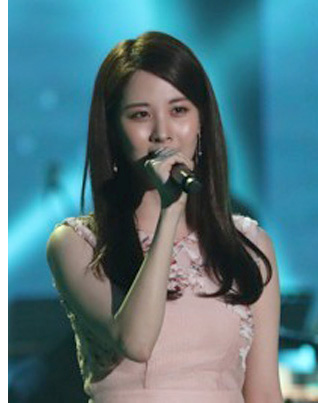 She joined the 160-member troupe, which held rare concerts on Sunday and Tuesday in reciprocation to the North’s performance in the South in February in celebration of the PyeongChang Winter Olympics.

“It appears all the performers, including me, hope the latest performances can serve as a stepping stone in improving inter-Korean relations,” Seohyun, whose real name is Seo Ju-hyun, said Wednesday in a written interview.

The 26-year-old singer emceed both shows and participated as an artist.

She hopes to participate in future inter-Korean cultural events. “If there are more peaceful exchanges between the South and North, I would always like to participate as a South Korean.”

Seohyun regretted that she was not able to sing in her best condition because of a cold.

“I was sorry and upset for not being able to deliver my song in the best condition. I was able to finish performing with courage from the warm cheers and applause.”

“She also wasn’t in her best condition, but she cared for me a lot and offered me words of wisdom and support.” Seohyun said of Lee. “I’ve practiced her music during my pre-debut trainee days and seeing her perform in front of my eyes was very emotional.” Yonhap