Visualizing the future through home design

Visualizing the future through home design 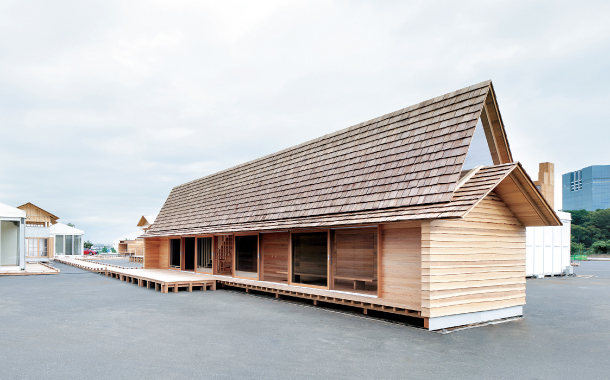 A house built through a collaboration between Airbnb and architect Go Hasegawa in Yoshino, Nara Prefecture. The first floor is a village community center, and the second floor will be rented out through Airbnb. [SEOUL DESIGN FOUNDATION]

A discussion about where one lives can be an awkward topic in Korea, as many believe that a home is not only a place to spend your days, but also an investment.

While many gather around new apartment building sites hoping to get their hands on a unit, others visited the Dongdaemun Design Plaza last month to discuss which homes fit what lifestyle.

Kenya Hara, a well-known Japanese designer came to Korea last month to share his insights on what future homes should be like. The president of the Nippon Design Center, Kenya launched a project called “House Vision” in Tokyo in 2011, and the same project started in Seoul last year.

He explains that “House Vision” is set up to show the possibilities of new industries booming through the creation of houses.

Some of the future home designs presented at 2016 Tokyo exhibition of “House Vision”: The top two are made by Yamamoto Holdings and designer Fumie Shibata, while the home pictured above is an Internet of Things home put together by Panasonic and Nagayama Yuko.[SEOUL DESIGN FOUNDATION]

“The house is a platform that can put many different industries together,” said Kenya adding that food, communications, logistics, energy and many other industries’ technologies are intertwined in homes.

“I’m not an architect and I wasn’t initially interested in the housing industry, but since I work as an art director and consultant to Muji, I expanded my interest naturally to work as the major target consumers for the company are those who want to build their own homes.”

The project started in Tokyo has spread to five other countries including Korea, China and Indonesia. “House Vision-Seoul” started last year as the Seoul Design Foundation collaborated with the Nippon Design Center. The immediate goal is to open a housing exhibition, and about 14 teams of architects and designers are working together on the event.

The Tokyo version of a real-size house exhibition occurred in 2016, and one of the houses that received the most attention was built as a collaboration between logistics and delivery company Yamato Holdings and designer Shibata Fumie. The house had an additional door on its exterior that opened into a refrigerator from outside. A food delivery person could drop fresh goods into the refrigerated space so that food would not go bad. “If you trace what kinds of items are delivered through this door, it becomes possible to take better care of households with an older resident,” said Kenya. “Just adding one door to your home can change many things.”

To find out what brought 600 people to a seminar that initially planned to have 250 people, the JoongAng Sunday talked to the design expert.

The house on the left shows how minimal piping can be used in a home, while the home on the right shows a space made for city dwellers who run small farms..[SEOUL DESIGN FOUNDATION]

Q. Why is this project you are doing important?

A. Design is something that needs to visualize the future. I think I’m here to suggest a vision for the future so that others can have moments of awakening. I want to make a country [with people] who have ideas to build their own life. 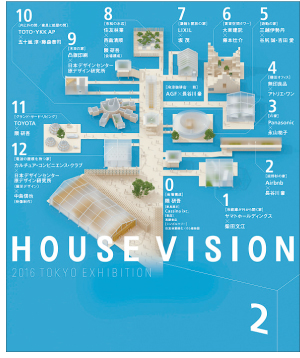 A poster for the 2016 “House Vision” exhibition in Tokyo.[SEOUL DESIGN FOUNDATION]

What changes have you noticed since you started your project?

Back in the day, living in a new home was something people were envious of. However, there are many people who want to fix old houses to their taste. Those people have started to show more interest in homes that they can make. When a home with a refrigerator on the outside of the house was introduced in 2016, the importance of logistics systems became evident. Other architects, like Sou Fujimoto, introduced houses with the kitchen in the center to make it a place where family members gather instead of a place where house chores happen. Other kitchenware designers have started to design the kitchen as more of a gathering place instead of focusing on the functions of each product. 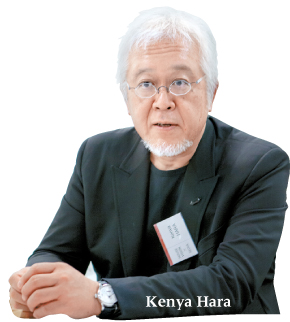 In Korea, houses are considered to be an asset. Is it different in Japan?

Since the 2011 earthquake, the concept of a house has changed. The house is a place to live, not an asset. When Japan was rapidly growing, people saw houses as an asset as the price of land and houses went up. We have passed that period and are now entering a more mature society. People now pursue their individual happiness. They try to make home a place where they can have better lives.

What problems have you noticed from the style of living in Seoul?

In fact, I don’t know too much about Korea. One thing I would say is that the difference in life between those who work at large conglomerates like Samsung, LG, and Hyundai and those who don’t is huge. It seems like the difference in income is noticeable in the style of living.

I don’t necessarily think living in a modern apartment is a fancy life. If everybody sees success as living in the same house, doesn’t that make society a little boring? I think Seoul is moving closer to the point where many people will want to build their lives on their own.

Why do Koreans have the same houses?

Korea has built many European style apartments as it went through rapid growth. Because of that, many locals lost homes that stored many insights from their ancestors. Korea will soon see more voices calling to preserve these [older] homes.

Japan only started to have this trend recently. It is a global community but there is no global culture, as culture reflects the local regions. I hope new design with roots in Asia finds its way to the rest of the world.