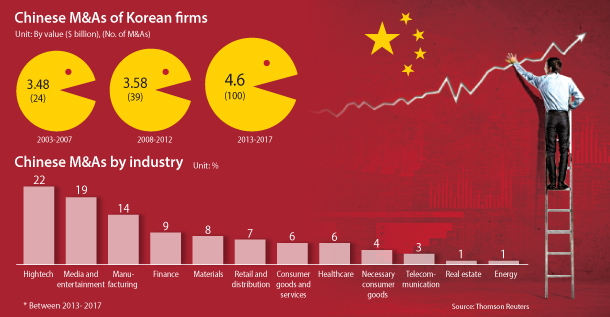 In 2006, DST Robot, a company that specializes in manufacturing and service robots, was listed on the Kosdaq. In 2015, the company was bought by China’s Beijing Linksun Technology.

The new management then started expanding its M&As, bringing in other Chinese investors.

However, in the process of taking over the Korean construction company Sambu Construction in September last year, DTS Robot was accused of various illegal activities such as falsifying its accounting books and embezzlement.

If DTS Robot fails to make the appointment, it would have to return the 20 billion won investment that the private equity fund made.

Despite the fact that the agreement, made in September last year, could have put DTS Robot in debt, the company omitted the contract from its auditing report made public on March 22.

“A debt of 20 billion won ($18.8 million) isn’t a small amount for a company whose total assets are 75 billion won,” said an accounting expert, who requested anonymity due to the sensitivity of the issue.

“If the company has intentionally omitted this agreement, it face a heavy penalty from the financial authorities.”

DTS Robot has denied any knowledge of the agreement.

The number of Chinese investors acquiring or merging with Korean companies has increased in recent years, including the recent acquisition of Kumho Tire by China’s Qingdao Doublestar.

Between 2003 and 2007 Chinese investors bought 24 Korean companies, amounting to 3.6 trillion won, according to Posco Research Institute. But between 2013 and 2017 that number shot up to 100 companies valued at 4.9 trillion won.

One of the major reasons Chinese investors are aggressively hunting for Korean companies is because of the talented employees, advanced technologies and brand value that Korean companies offer.

Additionally, the public’s perception of Chinese investment has improved compared to the past.

“Instead of stringent Korean venture capitalist investments, there have been many cases where [Korean] start-ups have benefited from Chinese investors,” said a game developer that requested anonymity. “There’s a rumor circulating that when you meet a Chinese investor, you should increase the requested investment by 10 fold.”

Some market experts say Chinese investments have also been an opportunity for Korean companies as they are less impacted by political conflict such as last year’s retaliation by China in protest of the U.S.-led Thaad anti-missile system.

But there are also those that worry about the damage that Chinese investments could cause by disrupting the local industrial ecosystem.

“In the case of the local steel industry there’s a stable price set between wholesalers and retailers,” said Posco Research Institute senior researcher Nam Dae-yub. “But if a Chinese investor buys one of the wholesalers, it would be focused more on the profit rather than maintaining the local industrial ecosystem.”

Companies that are bought by Chinese investors are also facing problems in regard to protecting other investors.

There have also been complaints that some Chinese companies take a far more casual approach to bookkeeping than their Korean counterparts.

In September last year China Ocean Resource, a Chinese fishery company, was ousted from the Korean stock market after it was found to have made false notifications and cooked its books. The company was listed on the Kospi in May 2009.

There have been other cases. Among the 23 Chinese companies listed on the Korean stock market since 2007, eight have been delisted for similar reasons.

“There are various policy measures including the financial authority increasing the frequency of investigations against companies that undergo M&As,” said Sohn Young-chae of the Financial Services Commission. “But it’s not easily to apply a regulation that would target a certain country.”

Hwang Se-woon, a senior researcher at Korea Capital Market Institute, said that if the Chinese government can’t be counted on to pressure Chinese companies to be more transparent in their accounting, oversight from Korean brokerage firms and credit evaluators as well as accounting firms should be strengthened instead.