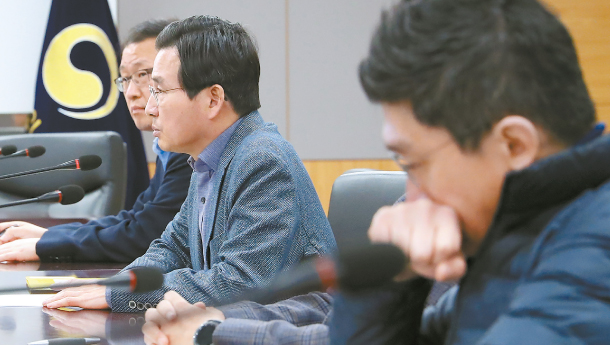 That sent the brokerage’s stock price plunging 3.64 percent by the close of the day.

Aside from the sheer size of the blunder, the orders were so-called naked short-selling, which is illegal in Korea.

In an approved short-sale or covered short-selling, traders must borrow a stock before they sell it short. But a naked short-seller is not required to borrow the securities in time to make delivery.

The Financial Services Commission (FSC) banned the naked option in 2008 in the wake of the collapse of Lehman Brothers and the global financial meltdown.

The FSC said Sunday that the country’s financial watchdog will launch a special investigation of Samsung Securities today.

“The Financial Supervisory Service will investigate on Monday to look into how it could order the shares that it didn’t own and how some of the shares were traded in the market,” said Kim Yong-beom, vice chairman of the FSC.

Kim also vowed to check how brokerages in Korea manage their accounts.

Some Samsung Securities employees put sell orders on the shares assigned to them, apparently to cash in on the blunder.

About 5 million shares were offered for sale.

Samsung Securities said that it has set aside 200 billion won to pay the buyers of those 5 million shares.

“We will try to minimize the impact on the investors,” said Koo Sung-hoon, CEO of Samsung Securities in a statement.

He acknowledged some unscrupulous aspects of the entire fiasco.

“It is an unacceptable event at a financial company because some employees triggered stock fluctuations. I feel distressed,” he said, “[I] will try my best to find the cause and prevent reoccurrence while holding the employees who showed moral hazard accountable.”

Still, Koo refrained from specifying how the company will penalize its employees who sold the shares.

The blunder will likely lead to tighter regulations on short-selling as indicated by the Financial Services Commission.

The regulator will establish a new team led by the agency’s Securities & Futures Commission to devise policies aimed at improving transaction practices among brokers.

Some financial institutions publicly warned of the risks associated with naked short-selling.

“A large amount of naked short-selling can trigger excessive reactions from investors, affected by the selling pressure in times of uncertainty,” said Korea Capital Market Institute in a report.

At the height of the global financial meltdown, the U.S. Securities and Exchange Commission blocked “excessive naked short-selling” and Germany followed suit in 2010.

European countries such as France, Italy, Spain and Belgium imposed the same rule in 2011.

A public petition to the Blue House to ban short-selling attracted 110,000 signatures.