The JoongAng Ilbo conducted a series of interviews with international affairs experts who weighed in on the proposed summit between the leaders of North Korea and the United States - which could determine the future of the Korean Peninsula. 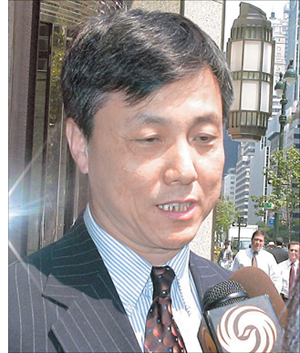 Yang Xiyu, a senior fellow at the China Institute of International Studies, is a veteran diplomat whose expertise lies in Korean Peninsula security issues, especially in respect to North Korea’s nuclear programs and the geopolitical threat it poses.

Yang served as Beijing’s deputy chief negotiator for the six-party talk involving the two Koreas, China, Russia, Japan and the United States in 2000. His draft of a joint statement became the basic framework for the Sept. 19, 2005 Joint Statement, which was accepted by all six nations as a guideline for North Korea’s denuclearization.

In an interview with the JoongAng Ilbo, the Korea affairs expert said Pyongyang’s two-track policy of pursuing both economic development and nuclear weapons had become a “zero-sum” game, noting its pursuit of nuclear arsenal had become an “obstacle” to economic development. “If the North wants to grow its economy, it has no choice but to give up its nuclear weapons,” he said.

He also said the Kim Jong-un regime’s mistrust of Seoul and Washington was much deeper than commonly understood, which he said had often been overlooked by the two allies.

Below are excerpts from the interview with Yang.

Q. North Korea is now suddenly looking for dialogue. What do you think is the reason behind such a change?

A. Pyongyang has been pursuing a two-track policy of desiring both economic prosperity and a nuclear arsenal. This has put it in a zero-sum game situation. They have progressed in nuclear and missile development, which are obstacles that stand in the way of economic growth. If the North wants to grow its economy, it has no choice but to give up its nuclear weapons.

Let’s assume that the North would be willing to give up its nuclear program. What would be the prerequisite to make that happen?

The international community should create an environment in which the North could still feel safe after its abandonment of its nuclear program. The Qaddafi regime of Libya terminated all of its nuclear programs in return for the U.S. lifting of sanctions against it in addition to economic aid. We all know what took place since then. North Korea has clearly taken a lesson from Qaddafi’s downfall.

If the global community wants North Korea denuclearized, it must present the North with a firm guarantee of its security and survival, which are only rational to require.

What actions should the international community take to ease the North’s security concerns?

It should guarantee the North’s regime security in both a bilateral and multilateral way. Based on the joint U.S.-North Korea statement declared in 2000, it should promise the following points: 1) Mutual non-aggression 2) Respect of each other’s sovereignty 3) No interference in one another’s domestic politics.

Should we expect some compromise from the upcoming U.S.-North Korea summit?

Issues can become more complicated after a summit meeting. Pyongyang thinks it should talk with Washington on the basis of an elevated position.

Late last year, it proclaimed it had achieved a balance of power with the U.S. In other words, it will try to gain many more concessions than what it gained from the 1994 Geneva talks because it thinks its power and status have become much stronger.

On the other hand, Washington will never make a move that could repeat the mistakes of the 1994 agreement.

The two sides could launch talks to denuclearize North Korea after the summit. But it will be a long way to go to find a middle ground given the huge gap in each’s position on the issue.

There are two unique strategies held by the North. First, it gives all-out efforts to turn the issue of building peace on the Korean Peninsula and its nuclear development into the possibility of diplomatic relations between the U.S. and North Korea.

Second, its level of mistrust toward Seoul and Washington is much stronger than the distrust of the two allies of Pyongyang. This is something the two allies often overlook but is an important fact to keep in mind. The North would take part in the talks sincerely when a sufficient level of trust is reached.