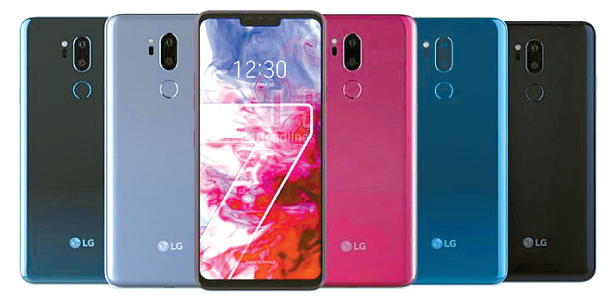 LG’s G7 ThinQ is to be unveiled in New York on May 2 and in Seoul on May 3. [LG ELECTRONICS]

ThinQ has been a brand used for LG’s home appliances that have AI functions, but it has not been applied to phones before the release last month of the LG V30S ThinQ. The Korean electronics giant emphasized that the ThinQ-branded phone comes with powerful AI technology that enhances voice recognition and camera features when it premiered the product at the Mobile World Congress in February.

Though the range of AI features was relatively small - such as software upgrades to find optimal lighting options on the camera app - using the ThinQ brand for its flagship lineup shows LG is determined to stick with AI in mobile.

With the G7 ThinQ, Korea’s second-largest electronics company said it will strengthen the connectivity of the phone with other AI-embedded devices like home appliances.

Some industry insiders thought LG might ditch the G series and come up with a brand new name to refresh its brand image, but it didn’t.

The G7 ThinQ will be introduced at a press event in Metropolitan West in New York on May 2, then in Seoul the next day.

“Until now we have focused on stuffing additional features on smartphones, but now is the time to reflect on how convenient consumers feel when actually using the phones,” said Hwang Jeong-hwan, vice president of the mobile communications division at LG Electronics, in a statement. “We will give consumers convenience they have never felt before by bringing together the AI technology we have accumulated in both the smartphone and home appliances divisions.”

Hwang was promoted at the end of last year from executive director of the mobile division to turn around the flagging smartphone business. He was closely involved in developing one of LG’s early smartphones in 2011.