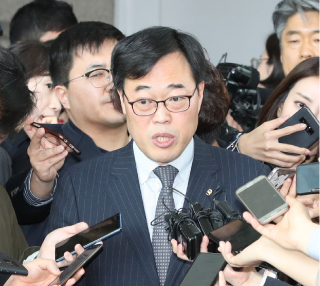 The leader of a small opposition party joined the chorus of calls on Tuesday for the head of Korea’s financial watchdog to resign over several trips he took as a lawmaker that were sponsored by companies he was supposed to be overseeing.

Yoo, a former presidential candidate, lodged a new complaint that Kim’s participation in a one-year program at Stanford University under the sponsorship of steelmaker Posco in 2007 amounted to hypocrisy. At the time, Kim was secretary general of the People’s Solidarity for Participatory Democracy, a civic group, and a harsh critic of the country’s conglomerates, of which Posco is one.

“How will he explain the fact that he went on an overseas program for one year with sponsorship by a conglomerate when he spent every day attacking the chaebol system as secretary general of People’s Solidarity for Participatory Democracy?” Yoo told reporters at the National Assembly on Tuesday. Chaebol refers to the country’s family-run conglomerates.

The lawmaker demanded Kim disclose all financial records from his time at Stanford. In response, the Financial Supervisory Service issued a press release on Kim’s behalf, saying he had not received any financial aid from the steelmaker.

Before his appointment as governor of the Financial Supervisory Service, Kim built his career as a strong critic of the country’s chaebol and their management and ownership structures, earning him the nickname “chaebol sniper.”

But since taking office at the beginning of the month, he has been mired in controversy over several overseas trips he took while he was a lawmaker. At the time, he was serving on the national policy committee in charge of overseeing Korea’s financial industry.

In March 2014, Kim went on a three-day trip to Uzbekistan sponsored by the Korea Exchange to review a proposal to help the country set up a stock exchange.

In May 2015, he embarked on a four-day trip to Chongqing, China, and Chennai, India, with expenses paid by Woori Bank. In Chongqing, he attended an opening ceremony for Woori’s regional branch.

That same month, Kim visited the United States and Europe on a 10-day trip sponsored by the state-funded Korea Institute for International Economic Policy. Revelations that Kim took an intern, rather than a higher-ranked adviser, for the 10-day trip further soured public mood.

The Liberty Korea Party and Bareunmirae Party called on prosecutors to investigate Kim for bribery and abuse of power. The Blue House stood by Kim and said the president would not dismiss him.

In a radio interview with TBS on Tuesday, Kim denied the allegations against him. He refuted claims that the 10-day trip sponsored by the Korea Institute for International Economic Policy swayed him toward the institute’s favor.

“After the trip, I slashed all budget increases that the Korea Institute for International Economic Policy wanted for its European operations,” Kim said, adding that he continued to push for tighter policies on the financial institutions that sponsored his other trips. He also noted that such overseas trips were customary for lawmakers at the time.

Nevertheless, Kim acknowledged that his trips in 2014 and 2015 fell short of people’s expectations and standards for high-level officials.

“In retrospect, I regret that I was not more vigilant about my actions because I was confident that I would not be swayed by lobbying efforts,” he said.