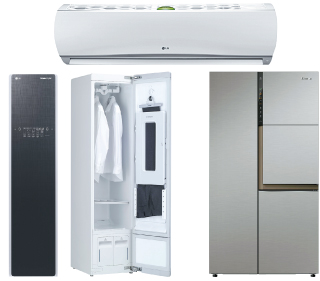 Clockwise from top: LG Electronics’ air conditioners sold in the Middle East, where many smoke indoors, purify air. Daewoo refrigerators have separate compartments for storing tea in China. The LG Styler can remove pollen from clothes in Japan. [EACH COMPANY]

From mosquito-repelling TVs to pollen-reducing closets, Korean companies are tailoring home appliances to meet local needs and tastes in overseas markets. Striking the correct regional chord is proving to be a hugely profitable business for home appliance manufacturers.

Daewoo Electronics is the leading domestic appliance company for regional customization, as its overseas sales have made up around 80 percent of its total sales in recent years. Since 1998 the company has produced over 100 appliances localized for different markets, selling an accumulated 5 million products.

In Malaysia and Indonesia, Daewoo sells three-in-one microwave ovens that can function as a convection oven, air fryer and grill, allowing users to cook their favorite local foods like ayam goreng, a popular deep-fried chicken dish, at home without adding oil.

In Mexico, Daewoo is promoting the combination oven “Chef Mexicano,” which has over 10 different buttons for cooking and heating up regional foods like Mexican meatloaf. Daewoo also launched a fridge in China with a compartment for storing tea, recognizing the strong tea-drinking culture.

Daewoo’s washing machines sold in Malaysia and Indonesia also come with a “batik care” button for washing batik clothing, a special type of dyed fabric commonly worn by Muslims. This option lowers the water pressure to 80 percent of normal levels, minimizing friction to prevent damage to the delicate fabric.

Samsung Electronics is also tailoring its equipment to local climate needs. Its Samsung F Series TV offers triple protection against humidity, power surges and lightning in African and Southeast Asian countries where the temperature is high and power sources are unstable. 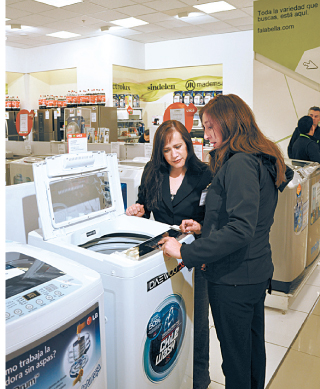 In warm countries like Saudi Arabia and the United Arab Emirates, LG also offers air conditioners equipped with tropical compressors that cool air quickly and function in temperatures of up to 65 degrees Celsius (148 degrees Fahrenheit). The coolers also have an air ionizing function to counter indoor smoking.

In West Africa, LG air conditioners that fend against mosquitoes are a huge hit. When a user activates the “mosquito away” function from the remote, a speaker from the appliance makes an inaudible ultrasonic wave at frequencies of over 30kHz to ward off the pests and prevent mosquito-borne diseases like malaria. Mosquito away TVs are also available on the Indian market.

LG televisions make it easier for Brazilians to enjoy their nation’s favorite pastime - watching football. LG Smart TVs sold in Brazil are furnished with “Painel Futebol,” which enriches the game-watching experience by allowing users to check team rankings and football championships news on the screen. Users can also activate a special mode to enhance the color of the pitch and amplify the sound to make it feel like they’re at the stadium.