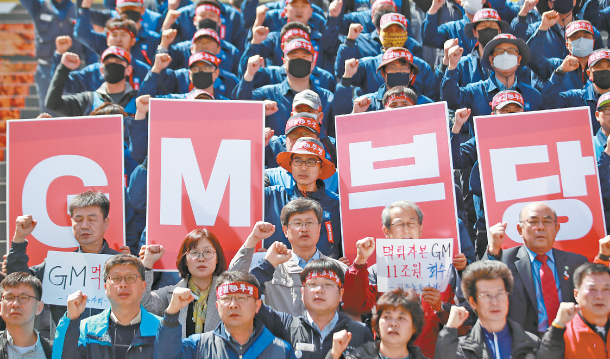 GM Korea union workers and other labor and civic groups hold a protest on the steps of the Sejong Art Center in Gwanghwamun, central Seoul, on Thursday. [YONHAP]

Financial Services Commission Chairman Choi Jong-ku told GM Korea’s labor union to come to an agreement with the carmaker before it’s too late.

In a meeting with heads of banks on Thursday, Choi said the agreement between the union and management is an issue that needs to be resolved before the government decides whether or not to support the company. He also asked financial institutions to help out the company’s contractors, which have been suffering since GM Korea closed its Gunsan plant earlier this year.

“In the course of negotiations and due diligence [the government] will demand GM take a responsible role to normalize GM Korea while guaranteeing the burden is shared fairly,” Choi said. “However, if labor and management fail to reach an agreement, it will be difficult to overcome any obstacles and future negotiations will be meaningless, no matter what the government does.”

Choi asked union members not to take drastic action. Last week, workers trashed the office of GM Korea CEO Kaher Kazem after the company failed to pay a bonus it promised them.

“Instead, the union needs to make the decision to reach an agreement with the management for the greater goal of saving quality jobs and securing GM Korea’s global competitiveness,” Choi said.

The FSC chairman also asked financial institutions to help out GM Korea’s contractors, many of which are competitive but facing cash flow problems.

“I ask [financial institutions] to put some effort into easing the difficulties of the contractors, which are competitive but short on liquidity temporarily,” Choi said. He added that financial companies should think twice about denying fresh loans or demanding contractors repay their debt early.

“Even if GM Korea reaches an agreement, if the industrial ecosystem collapses, it will be difficult to rebuild its current competitiveness,” Choi said.

Choi’s meeting with bank heads took place on the same day that GM Korea’s union and management were scheduled to negotiate for the second time in two weeks. The company asked to postpone the meeting, however. The two sides were said to have clashed over GM Korea management’s request to record the negotiations on video, which the union did not accept.

Management is proposing a minimum 250 billion won ($232 million) cut to labor costs. While the union agreed to a 140 billion won cut after agreeing to a freeze on wages and bonuses, it is not accepting a proposed 100 billion won cut to welfare benefits, including a three-year suspension of school tuition payments for union workers’ children.

GM Korea also on Thursday formally submitted a request to the government to designate its plants in Incheon’s Bupyeong District, and Changwon, South Gyeongsang, as foreign investment areas.

If the government accepts GM Korea’s request, the automaker will be eligible for various tax benefits, including a full exemption on corporate taxes for the first five years and a 50 percent discount for two more years.