The director and cast of “Marionette” at a media event to promote the film in Seoul on Friday. From left to right are actors Lee Hak-ju, Oh Ha-nee, Lee You-young and Kim Hee-won and director Lee Han-wook.

“Marionette,” an upcoming crime thriller from director Lee Han-wook, explores the taboo subjects of juvenile delinquency and child pornography, and the dark intersection of the two - that child pornography in Korea is often made by minors.

Years after Seo-rin, played by Lee You-young, is coerced into filming an adult video by a group of male classmates, she is now a schoolteacher struggling to forget her past.

“I wasn’t sure how I would be able to make a commercial movie based on such a subject,” director Lee Han-wook said at a media event for the film in Seoul on Friday. “As director, I was quite concerned about how audiences would perceive the subject. My purpose while writing the script was to touch on youth problems.”

In the film, moments from Seo-rin’s past appear to repeat themselves. After she drinks a spiked cup of coffee that was left on her desk, she falls into a deep sleep and wakes up to a flood of text messages from a man who calls himself “Master.” The messages contain revealing photos of her. 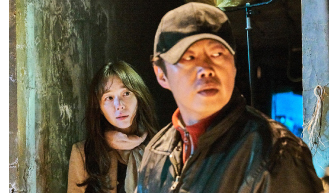 “Marionette” is a crime thriller that touches on the taboo subjects of juvenile delinquency and child pornography. [CINEGURU/KIDARI ENT]

Frightened, Seo-rin does not divulge the incident to anyone, not even her fiance, who later in the film casually blames victims for the sexual assaults that happen to them. Rather than going to police, Seo-rin contacts the detective who handled the child pornography case from her teen years. The brash and foul-mouthed detective, Guk-cheol (Kim Hee-won), no longer works in law enforcement and now runs an internet cafe, but he pulls some strings with his former colleagues to help Seo-rin find the “Master.”

“I tried to imagine [how Seo-rin felt] while acting, but there were some points I dared not even imagine,” said Lee You-young. “I felt a lot of responsibility with the movie. Even if I were Seo-rin, I think I would have kept it to myself. I understand why she [kept her past to herself]. I also understand the reality that victims face in not being able to openly bring up the issue.”

When Kim first read the script, he said he wasn’t surprised by the story. “I had the feeling that such social issues could exist in reality,” he said, “and I also heard that a series of similar events happened in real life.”

For Kim, it was difficult to play a detective helping a sexual assault victim because he could not imagine himself in her shoes. “Although Guk-cheol is warm-hearted in general, he also has a tough side,” he said.

In the film, one of Seo-rin’s students, Se-jeong, played by Oh Ha-nee, falls victim to the same kind of coercion that Seo-rin faced in high school. “By depicting a victim, I hope to draw sympathy from audiences and give them a chance to reflect on the core of the social issue,” Oh said.

The release of “Marionette” comes at a time when Korea is grappling with revelations of sexual assault and harassment by figures in entertainment, politics and big business. Scores of women have come forward with stories of misconduct in schools and the workplace.

“I was very shocked when the Me Too movement arose,” Lee You-young said. “I think I lived without knowing much about it, but at the same time, I am glad that the world is gradually changing. I’m also sad about some cases in which the movement is being abused. I hope we can live in a world where people live with conscience.”

“Marionette” is rated R and hits theaters in Korea on Thursday.