Too many saunas, not enough soul

Too many saunas, not enough soul 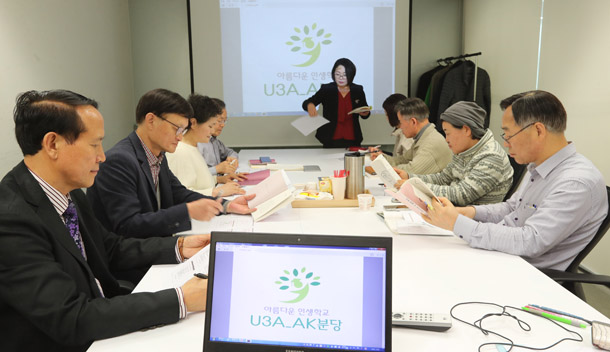 “Put learning and ideas back to where they should always have been — right in the middle of our lives.” This is the motto of the School of Life founded by popular author Alain de Botton in London in 2008. In May 2017, “Non-Summit,” a television program on JTBC, interviewed de Botton. He said he founded the school because the world was not good at teaching the skills needed to live a happy life. It is a school for grown-ups who need insight and wisdom. It is his philosophy that humans are animals that learn and teach, so lifetime learning is natural.

In 2015, a branch of the School of Life opened in Korea. According to principal Sohn Mi-na, it is a “sauna for the soul.” Aside from this branch, there are many “schools of life” across the country, mostly sponsored by local governments. They aim to provide lifetime learning or preparation for aging. They have different names, but similar mottos: “Redesigning the life,” “Richer lives for middle-aged and senior citizens,” and “Active elderly life.” This spring, many more schools of life were established and opened.

The city of Chungju opened the Life Design School on April 9. The goal is to support aging baby boomers. On April 4, the entrance ceremony for the Tamra 5060 School of Life was held in Jeju. It aims to help redesign the lives of seniors. Colleges and universities also pitch in. The 4060 Hwaseong School of Life is run in partnership with Suwon University, Jangan University and Hyupsung University. It focuses more on vocational and start-up support programs.

These schools announce plans for their future operations. The city of Incheon presented a plan to operate a life school later this year. On April 10, the Seoul Metropolitan City opened the main campus of the Free Citizens’ College. The city plans to establish 100 citizens’ colleges by 2022 and award honorary masters and doctorate degrees.

Candidates for educational superintendents also made proposals. Seoul National University Prof. Cho Young-dal announced his candidacy for Seoul Educational Superintendent and presented a plan to open a school of life.

There is no reason to object to the idea of offering old people a chance to learn. But I see the shadow of the June 13 local election. I suspect that this could be a one-time stunt to please voters. It sounds like a stretch to care so much for retirees when superintendents are meant to focus on educating students. The key to a sustainable school of life is commitment. It is not like we have an election every year.