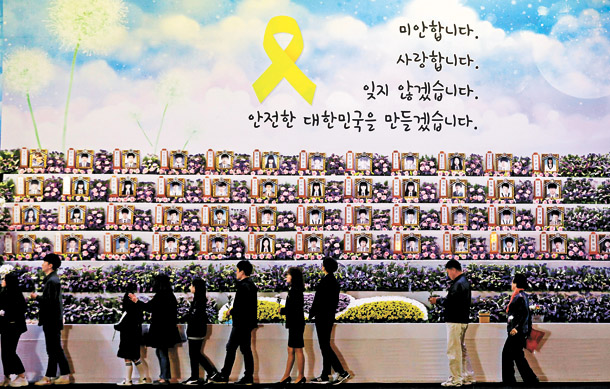 Visitors pay respects to victims of the 2014 Sewol ferry disaster at an incense altar set up by the central government in Ansan, Gyeonggi, on Sunday. Danwon High School, which lost 250 of its sophomores in the accident, is located in Ansan. [NEWS1]

President Moon Jae-in pledged to prioritize safety in a statement on Sunday commemorating four years since a ferry sinking killed 304 in the country’s worst maritime disaster.

Most of the victims aboard the fated Sewol ferry, which capsized on April 16, 2014, were high school students on a field trip to Jeju Island.

“All of the students are our own children, children who have become stars in the sky,” Moon said in a statement posted to his Facebook profile on Sunday. “They have changed South Korea. After the tragedy of the Sewol ferry, we have changed, changed to put life first and to share the burden and hurt of our neighbors.”

The disaster galvanized the nation and revealed loopholes in the government’s response process. Prosecutors earlier this month discovered that then-President Park Geun-hye had been in her bedroom consulting with her confidante, Choi Soon-sil, and getting her hair done when the accident occurred.

Her relationship with Choi, who held no political office but allegedly facilitated bribes on behalf of President Park, sparked protests against her administration and led to her ouster in 2017.

“The candlelight protests and new administration began with the Sewol ferry incident,” Moon said. “Personally for me, it made me think more urgently about the role of politics in our nation.”

Among the 304 people who died, 250 were sophomores at Danwon High School in Ansan, Gyeonggi. Crew members told them to stay put while the ship was sinking, but the captain, Lee Jun-seok, managed to escape. He was sentenced to life in prison for involuntary manslaughter in 2015.

The exact cause of the sinking remains unknown.

“I promise to find the truth behind the sinking,” Moon said. “Through the investigative committees established by the government, the truth will be found.”

The president also promised to continue efforts to locate the remains of five people who are still missing. The ferry itself was salvaged from the seabed in April 2017 and lies on its port side at Mokpo New Port in South Jeolla.

There were originally nine missing victims, but the remains of four were found inside the ship after it was pulled onto land.

“As soon as we have the ferry upright, we will begin the inspections again inside the ferry,” Moon said. “We will make sure no stone is left unturned.”

A special funeral service for the 11 victims who were not part of Danwon High School or the ship crew will be held in Incheon today. For various reasons, including missing remains, the 11 individuals have not had a funeral service yet. It will be sponsored by the Ministry of the Interior and Safety.

Over the weekend, civic groups in Daejeon and South Chungcheong held flash mob performances and walks to remember the victims. There were also pilgrimages to Paengmok Harbor in South Jeolla, the closest point on land to where the ferry capsized, as there have been every year since the accident occurred.

“I hereby send my deepest condolences for the relatives of the victims,” Moon said. “I understand that their grief may not abate with time.”

Parents of the students who died in the ferry have authored a book filled with letters they wrote for their children. The book was published on April 9.

“When I miss you terribly, I look for you at the cemetery,” wrote Park Ji-min, the mother of Jung Won-seok, a student of Danwon High School who died in the accident. “Though the box containing your ashes is cold, I still want to feel you. If I had known that you would leave my side so quickly, if I had known that I would not be able to hug you once more, I would have tried to make you happier when I could. My loving son, I only wait for the day until I can finally see you again.”

“You would be 22 years old now,” wrote the mother of Han Go-un, who also died in the ferry. “I want to see you, but you do not come out in my dreams as often as before. I hope we can meet in our dreams tonight. Let’s do all that a mother and 22-year-old daughter would do together. I love you forever.”

On Friday, the parents read their letters aloud at an event promoting the book at the Seoul NPO Center.

“Initially, I thought, ‘What use it would be to write a letter to a son who will not return to me?’” Park, the mother of Jung, said at the event. “But once I decided to write one, I didn’t know how to end it. It’s been four years, but nothing has been revealed about what really happened. For us, time stopped on April 16, 2014.”

“I hope they can find something once the ship is upright,” Kwon Oh-bok, whose younger brother and nephew are among the five passengers yet to be retrieved, told the JoongAng Ilbo on Friday. “The hardest part of all this is waiting. You don’t know when it will end…I didn’t know it would take this long to try to find them.”