After hefty investments, both revenue and losses increased at Coupang in 2017

After hefty investments, both revenue and losses increased at Coupang in 2017 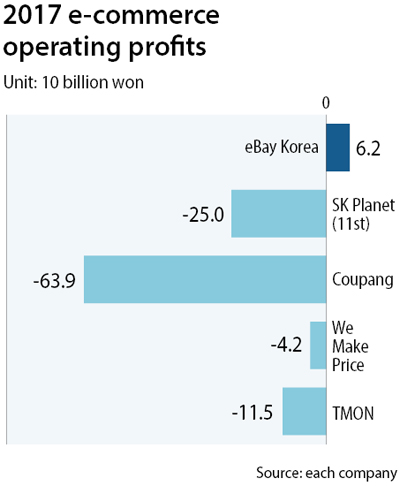 Coupang once again struggled with a hefty operating loss in 2017 despite a substantial campaign to expand its business and heavy investment in its popular overnight delivery service.

Coupang’s business continues to expand but its sustainability remains to be seen as it again posted a grim loss for the year of 2017.

Coupang posted 2.7 trillion won ($2.5 billion) in revenue last year, according to the company’s earnings report on Monday, up by 768.6 billion won, a 40 percent year-on-year jump.

Yet the e-commerce firm wasn’t able to recover from its accumulating operating losses.

Coupang started its business with a Groupon-like crowdsourcing platform that offered daily discounts and deals in 2010. Its potential was widely acknowledged when SoftBank invested 1.1 trillion won in the fledgling e-commerce firm in 2015.

The company then started to veer away from its initial business model in 2016 to focus more on a rapid overnight delivery service and open market platform.

During the transition period, Coupang accumulated more than 1.5 trillion won in operating losses, raising questions over whether it could ever become a profit-making business.

On the back of rigorous investment last year, Coupang said it has secured a total of 54 logistics centers nationwide which enable overnight delivery - a popular Coupang service - of more than 7 million items.

“Our customers can now choose from millions of Rocket items [overnight delivery items] as late as midnight and receive them within a day,” Bom Kim, founder and CEO of Coupang said in a release Monday.

The e-commerce industry has been struggling with cutthroat competition over the last few years due to the drastically increasing number of players.

In 2017, eBay Korea, which operates Gmarket and Auction, was the only major e-commerce company that posted a positive operating profit.