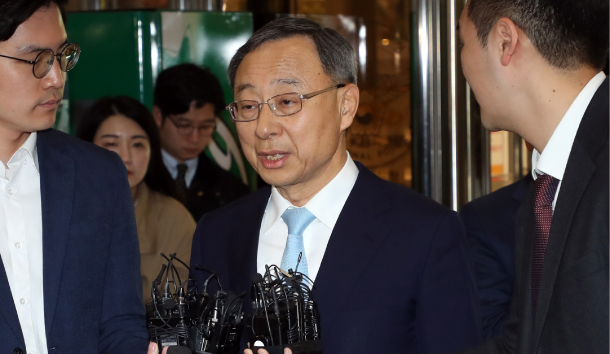 KT Chairman Hwang Chang-gyu answers reporters’ questions before entering the National Police Agency in western Seoul on Tuesday. Hwang was summoned as a suspect in a case involving illegal political donations from the company’s coffers. [YONHAP]

Police summoned the chairman of Korea’s second-largest telecom company on Tuesday for questioning on allegations that the company’s employees illegally donated corporate funds to lawmakers.

Between 2014 and 2017, employees at KT allegedly donated about 430 million won ($402,450) to some 90 lawmakers by using their corporate credit cards to buy gift certificates. They then exchanged the certificates for cash, which was later donated to lawmakers, according to police.

Korean law forbids corporations from making political donations, and authorities have been investigating the case for months. On Tuesday, they summoned Hwang Chang-gyu, who has been leading KT since 2014, to question him on whether he was aware of his employees’ actions.

“I will faithfully answer to the investigators,” Hwang told reporters before entering the National Police Agency in western Seoul at around 9:30 a.m. on Tuesday.

In January, police raided two KT buildings in central Seoul and Gyeonggi, including Hwang’s office. They suspect the lawmakers who received donations were involved in legislation concerning internet banks, telecommunications and related budgets.

KT is a major stakeholder of K bank, the country’s first internet bank, which was established in April 2017.

Police have also summoned the employees for questioning.

Hwang is the first KT chairman to be summoned as a suspect since the company, once a public corporation, was privatized in 2002, but it is not the first time Hwang has appeared before authorities for questioning.

Last year, he was a witness in the corruption case involving President Park Geun-hye, who was ousted from office on charges of bribery and abuse of power. Earlier this month, a court found Park guilty of pressuring Hwang to employ Lee Dong-soo and Shin Hye-seong, two acquaintances of Park’s friend Choi Soon-sil. KT was also forced to select Playground Korea, an advertising company run by Choi, as its advertising agency.

Since the allegations involving Park surfaced last year, lawmakers, civic groups and the New Labor Union of KT have been calling for Hwang’s resignation. They accuse him of deliberately collaborating with Park.

Outside the National Police Agency on Tuesday, the same civic groups were demanding Hwang’s resignation.

The 65-year-old chairman was previously an executive at Samsung Electronics. He is the second conglomerate head to be investigated by police under the Moon Jae-in administration.