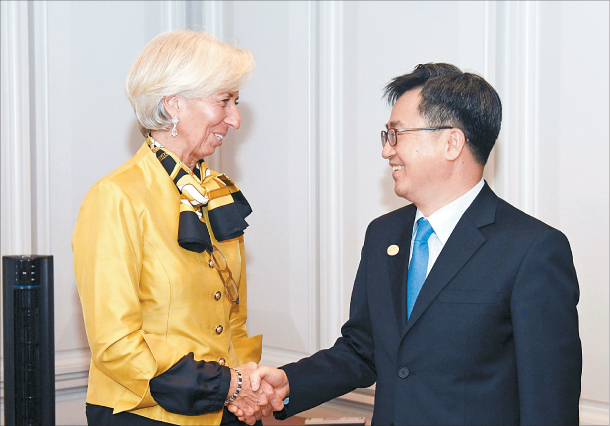 Christine Lagarde, managing director of the IMF, and Kim Dong-yeon, Korean Finance Minister, meet at the IMF headquarters in Washington where a G-20 Finance Ministers and Central Bank Governors meeting was held on Thursday. [MINISTRY OF STRATEGY AND FINANCE]

The country’s finance chief is in Washington trying to figure out how to deal with demands that Korea be more clear about its interventions in the foreign exchange markets to affect the value of the won.

Korea is being pressured to be more transparent about its foreign exchange purchases and sales as the United States threatens to name Seoul a currency manipulator.

“Kim conveyed a message to Lagarde that [the ministry] will make a decision prudently by factoring in other countries’ cases, Korea’s foreign currency and market structure and experts’ opinions,” the Finance Ministry said in a statement.

In response, Lagarde was quoted as saying that “there will be little concerns over side effects [of the publication of transactions],” according to the ministry.

In a report accompanying the list, the Treasury Department urged Korea to disclose more data on its foreign exchange market intervention.

“It is important that the Korean authorities act to strengthen domestic demand and avoid reverting to excessive reliance on external demand for growth,” the report entitled “Macroeconomic and Foreign Exchange Policies of Major Trading Partners of the United States” read.

“Treasury will continue to monitor closely Korea’s currency practices and urges the authorities to report its exchange rate intervention in a transparent and timely manner,” it said.

Market analysts and insiders said that Korea will try to release as few records as possible such as on a quarterly or yearly basis.

The Finance Ministry is expected to prefer to reveal only net purchase figures and not be more specific.

Korea is the only country that doesn’t publicly disclose its currency market interventions among member countries of the Organization for Economic Cooperation and Development.