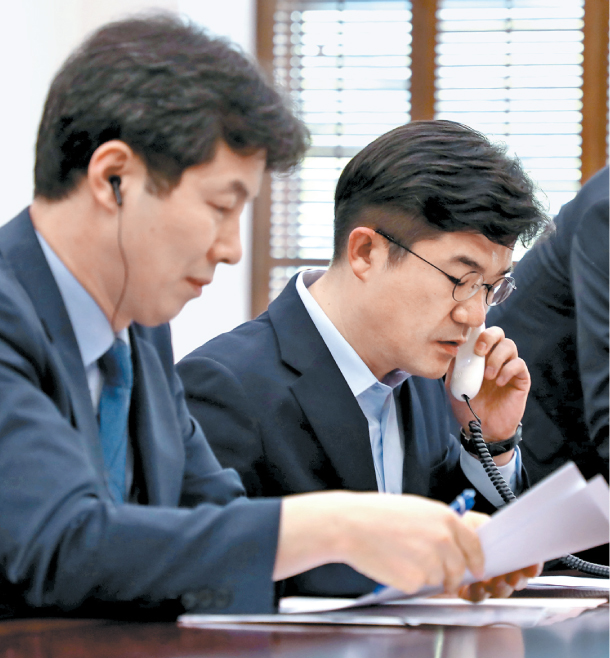 A hotline between the South and North Korean leaders, the first of its kind, was successfully tested Friday afternoon, exactly one week ahead of their summit on April 27, according to the Blue House.

Yun Geon-young, a Blue House official who heads the situation room for the inter-Korean summit preparatory committee, said after the test run, “The connection of a historic direct line between the South-North leaders have been completed.”

The trial call took place between Song In-bae, a personal secretary to the president, and a North Korean State Affairs Commission official.

Kim Eui-kyeom, the presidential spokesman, said the previous day that the South’s Blue House will be linked up to the North’s State Affairs Commission.

This new hotline will enable the two leaders to have a direct line of communication, though the Blue House has yet to confirm when their first call would take place.

A call between Moon and Kim is likely to happen early next week, ahead of the first inter-Korean summit since 2007, to take place in the truce village of Panmunjom at the border next Friday.

There is a lot of advance interest in what messages will be conveyed in the phone call.

Moon on Thursday said that North Korea has expressed its commitment to “complete denuclearization” of the Korean Peninsula and has not attached conditions, such as the withdrawal of U.S. troops from the South.

Two rehearsals of the summit are expected to take place next week at its venue, the House of Peace on the southern side of the Panmunjom, according to the Blue House.

A run-through of the entire summit is scheduled to take place Tuesday afternoon by members of the preparatory committee, and another full rehearsal will take place Thursday, involving more participants to fine-tune details.

North Korea is also expected to run its own rehearsal separately at the venue either on Tuesday or Wednesday.

The House of Peace has been undergoing remodeling work starting from April 6, which was completed Friday. This will be followed by furnishing, decorating and hanging of artwork, installing of electronic equipment and the laying of a red carpet in the lobby.

A Blue House situation room will be installed on the third floor of the House of Freedom, near the House of Peace, from Tuesday to manage the summit.

Another situation room for the media will be set up from Tuesday at the main press center at the Korea International Exhibition and Convention Center, or Kintex, in Ilsan District, Goyang, Gyeonggi.