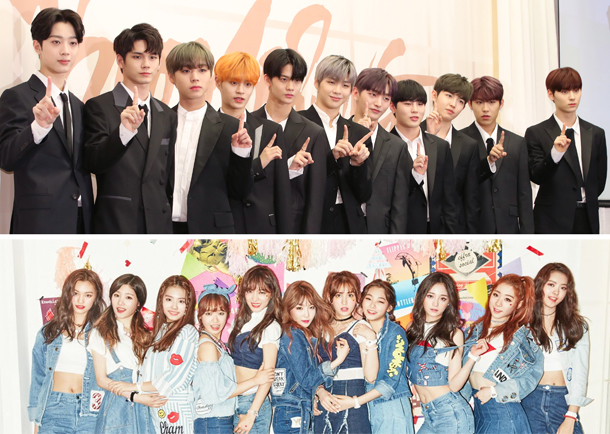 All of the members of disbanded girl group I.O.I and boy group Wanna One participated in the recording of Mnet’s new competition show “Produce 48” on Sunday, according to several sources from the network.

Both groups were created on the Mnet competition program “Produce 101” - I.O.I was formed from the contestants on season one and Wanna One from season two. As the winners of the previous “Produce” iterations, members of the two groups appeared on the new show to give advice and encourage the latest group of contestants.

This was the first time all 11 members of I.O.I gathered together for an official event since the group disbanded back in 2016.

It was also announced that I.O.I member Jeon So-mi and Wanna One member Kang Daniel participated in the show’s first taping on April 11.

“Produce 48” is a collaboration between Mnet and Japanese producer Yasushi Akimoto. Ninety-six female trainees from both Korea and Japan will be competing to become part of the final idol group, which will be active for two and a half years. The show is set to premiere in June.