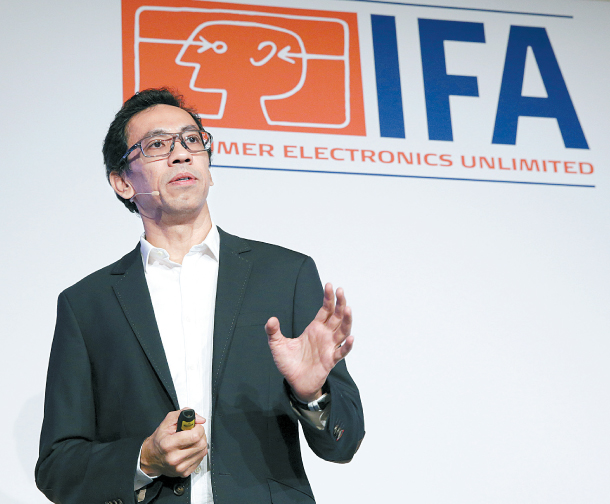 Gerard Tan, the director of the digital world in the Asia Pacific region at market researcher GFK, speaks during a briefing session on Friday at the IFA Global Press Conference in Rome. [IFA]

ROME - Asia is without a doubt the hotbed of the global consumer electronics market, according to Gerald Tan, the director of the digital world for the Asia Pacific region at global market researcher GFK.

Korea is no exception, he says.

Tan’s presentation on digital retailing in the Asia Pacific was part of the 2018 IFA Global Press Conference, which took place in Rome on Friday and Saturday.

While the number of gadgets sold has been decreasing for the past few years, the amount of money spent on each product is actually going up due to increasing demand for premium products and state-of-the-art technology, according to Tan’s research.

“Everything sold less last year, but everything was more expensive than before,” said Tan.

In the Asia Pacific region, the number of TVs sold last year dropped by 5 percent from 2016. However, the actual amount in U.S. dollars spent on TV purchases jumped by 7 percent last year.

The number of smartphones sold last year in the Asia Pacific region increased by a mere 1 percent, while the money spent on the purchases saw jumped by 12 percent year-on-year.

“For brands, this is a challenging trend because when they launch models, they have to be extremely careful,” said Tan. “The consumers are going to spend on the most nice-looking and premium devices.”

The increasing popularity of PC gaming is one of the factors driving up the overall electronics price index, Tan pointed out.

The average price index of gadgets required for PC games, including a desktop, keyboard, mouse and headset, went up by 2.5 times last year compared to 2016.

Gadgets equipped with new technologies, such as wireless ear plugs and AI wearables, are also driving more spending in the Asia Pacific region.

Wireless gadgets are three to five times more expensive than standard wired gadgets, according to Tan. The amount of money spent on wireless headsets jumped 1,271 percent from 2016 to 2017 in the Asia Pacific.

Tan said that the region’s consumers are especially open-minded to new technologies.

Seventy-five percent of Chinese respondents recently surveyed said that “smart home” technology will change their life in the near future. The worldwide average was 50 percent. In Korea, 55 percent of the respondents agreed with the statement.

“People in the Asia Pacific are hungry for new technology. Consumers are excited about the artificial intelligence-equipped products and they are not afraid to use them,” Tan said.

Smart appliance sales jumped 21.8 percent in the region from January to February this year, while in Western Europe, they increased just 9.3 percent and in Central-Eastern Europe 8.9 percent.

China is taking on increasing importance as a market for the diverse new crop of home appliances.

Korea may be a saturated market for consumer electronics, but there’s still room for growth, according to industry experts.

“Korea is a mature country, being the most connected country in the world,” said Tan. “Using that connectivity, Korea can be at the forefront at the VR and AR kind of new technologies. I think these will be later incorporated into mobile devices, enabling virtual shopping, as well.”