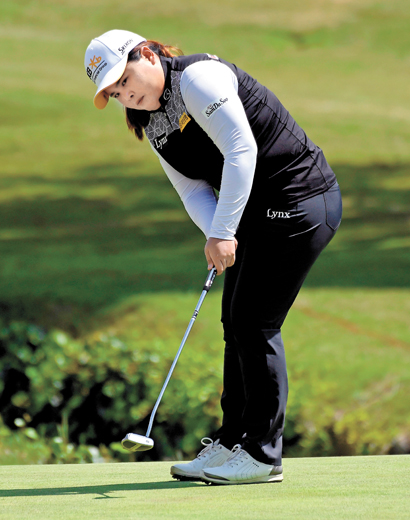 Park In-bee watches her putt at the inaugural Hugel-JTBC LA Open at Wilshire Country Club in Los Angeles, California. By finishing in second place, Park reclaimed her top spot in the world rankings for the first time in more than two years. [AP/YONHAP]

Park In-bee reclaimed her ranking as the world No. 1 in women’s golf for the first time in two and half years, despite her runner-up finish at the Hugel-JTBC LA Open at Wilshire Country Club in California on Sunday.

Park’s second place was good enough to bring up her standing in the Rolex Women’s World Ranking by two spots, ahead of Lexi Thompson of the United States and Feng Shanshan of China. Park needed to finish sixth or better this week to take the top spot.

Heading into the tournament at third in the world, Park was 0.38 ranking points behind Feng. As both Feng and Thompson finished tied for 12th, Park’s runner-up finish was more than enough to exceed her two competitors.

By shooting a final round of three under par 68, Park finished tied with Ko Jin-young at 10 under par. Moriya Jutanugarn of Thailand won her first LPGA Tour win with 12 under par in her 156th start on the Tour.

“It’s good to be back, obviously, in the No. 1 spot, but that really wasn’t my goal playing this year,” Park was quoted as saying by Yonhap. “All the rankings are so close together. It can change every week. It’s just hard to keep track. I’m just trying to play golf, and [it] doesn’t matter where I am at.”

Though the LPGA Tour hasn’t yet reached its halfway point for the season yet, Park’s return has been very impressive so far.

After her last two seasons were marred by injuries, Park came back with a win in the Bank of Hope Founders Cup, her second tournament of the season.

Park’s victory in March reflects her pattern of successful comebacks. In 2016, she won a gold medal at the Rio Olympics in Brazil after skipping the majority of the tournament due to a thumb injury prior to the Games.

Then Park won another tournament at the beginning of the 2017 season after taking the entire season off after the Olympics.

While many golfers have had great returns to the sport, not many have been able to climb to the top of the leaderboard so quickly after coming back. Park even considered retiring while she took time off last season, making her hot streak even more impressive.

Following Park’s victory in March this season, she played consistently and didn’t let injuries get in her way. After finishing in 31st place in the Kia Classic tournament, which she played right after her first win of the season, Park came in second twice and in third place once in her three most recent tournaments.

During the tournament on Sunday, a 20th career LPGA Tour victory was within Park’s reach, but her disappointing performance in short putts caused her shot to slip away.

In two other tournaments over the past month, Park’s short putts bedeviled her. At the ANA Inspiration, Park lost to Pernilla Lindberg of Sweden on putts after playing eight playoff holes. At the Lotte Championship, Park finished in third after missing a number of short putts. Once again, at the Hugel-JTBC LA Open, it was her putting that stopped her from beating Moriya Jutanugarn.

Though Park could be winning more tournaments this season if her putting was on point, her overall statistics still dominate the tour as she currently leads the CME Globe points standing.

Aside from Park, Korean golfers had a great weekend at the inaugural tournament as Ryu So-yeon and Ji Eun-hee finished in the top five.

This Thursday, the LPGA Tour will continue as the inaugural LPGA Mediheal Championship kicks off in California.