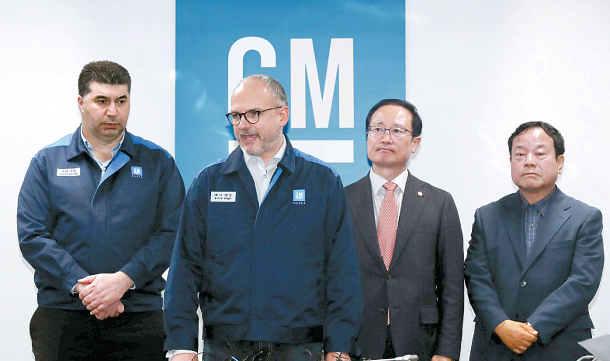 GM Korea and its labor union agreed to a last-minute deal to save the company on Monday, with both sides compromising on the automaker’s planned factory closure and cuts to employee benefits.

According to the company, its management and union came to a consensus on how to deal with 680 workers from its Gunsan plant in North Jeolla, which is set to be completely closed down in May.

GM Korea decided to accept voluntary resignations from workers and then relocate any Gunsan employees who decide to remain with the company, replacing its initial proposal that would have forced some workers to take extensive unpaid leave.

Initially, the management offered to transfer 100 workers from its Gunsan plant to the company’s other plants in Bupyeong District, Incheon, and Changwon, South Gyeongsang, while putting the rest on four-year leave without pay. The union adamantly rejected the proposal.

The union agreed to a wage freeze and no bonus for the year as well as a suspension to some work benefits.

A new sport utility vehicle for domestic sales and exports will be produced at the Bupyeong plant by the end of 2019, while the Changwon plant will manufacture a new crossover utility vehicle starting in 2022.

GM Korea and the labor union have been negotiating since Feb. 7. The agreement between the two came in the nick of time, right before the company would have been thrown into court receivership.

Had they failed to strike a deal before 5 p.m. yesterday, the board of GM Korea was scheduled to hold a meeting that evening to discuss court receivership.

GM initially set last Friday as the deadline after which it would file for court receivership, which may have been the end of the company. It decided to push the date to Monday.

Despite extensive negotiations, during most of the weekend there were no breakthroughs in the official meetings.

But the turning point was a sideline meeting from Sunday evening to Monday morning. It was attended by GM Korea CEO Kaher Kazem, GM Korea union representative Lim Han-taek, vice minister of employment and labor Yi Sung-ki, Hong Young-pyo, the head of the GM task force committee at the ruling Democratic Party and Barry Engle, president of GM International.

Executives of the company and the union resumed their official talks at around 5 a.m. on Monday to work out the final details of the agreement.

It is now up to GM headquarters and the state-run Korea Development Bank (KDB) - the largest and second-largest shareholders in GM Korea - to decide on a cash injection plan to keep the automaker afloat.

GM, which owns 77 percent of GM Korea, previously proposed converting $2.7 billion of the Korean unit’s debt into equity and offered $2.8 billion in investment over the next 10 years. The Detroit-based auto giant also asked the KDB to contribute 500 billion won ($465.5 million) to the carmaker.

The KDB, on the other hand, requested a 20-to-1 selective capital reduction to maintain its 17 percent share in the company, since the debt-to-equity swap proposed by GM would bring down the KDB’s share in the company from 17 percent to 0.9 percent. The state-run bank must keep its share above 15 percent to keep its veto rights. The KDB said that it would offer an amount proportional to its share if GM accepts its terms.

Choi Jong-ku, the chairman of Korea’s Financial Services Commission, called on GM to provide a long-term solution to get its local unit back on track.

“The government and the KDB will determine the support measures [based on the long-term plan provided by GM],” the head of the financial regulator told reporters on Monday.

The government held a high-level meeting on Monday after the announcement was made, which was attended by top officials including Ko Hyoung-kwon, the first vice minister of strategy and finance. The officials decided to conduct an inspection of the company to make sure the main shareholders are acting responsibly and the company’s burdens are shared by all parties, according to the Finance Ministry.