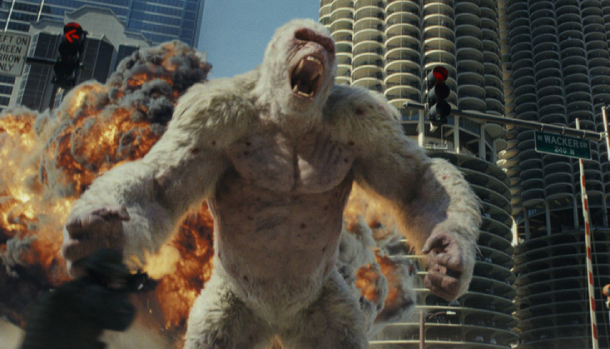 Despite divided reviews, Dwayne Johnson’s sci-fi monster film “Rampage” continued to top the local weekend box office in its second weekend. While silent horror flick “A Quiet Place” fell to the third spot, a local documentary, “Intention,” climbed its way up to reach the second spot from last week’s sixth.

“Rampage,” featuring Johnson as a primatologist who has a special bond with an albino silverback gorilla, sold 364,000 tickets at 886 screens from Friday to Sunday, bringing its total sales to 1.26 million.

The movie, directed by Brad Peyton, accounted for 34.2 percent of the weekend’s entire ticket sales, far exceeding the 10 percent recorded by “Intention.”

The local documentary, about the 2014 Sewol ferry sinking, sold 108,960 admissions at 643 screens during the three days, bringing its total ticket sales to 385,000. Narrated by Jung Woo-sung, “Intention” provides convincing clues to the cause of the incident that killed more than 300 people, most of whom were high school students on a field trip to Jeju Island. It is director Kim Ji-yeong’s first feature film.

“A Quiet Place” narrowly fell to third, selling 108,760 admissions from Friday to Sunday. Directed by John Krasinski, and starring himself and his wife Emily Blunt, the film is about a family in a future dystopia populated by violent creatures with extremely acute hearing.

Steven Spielberg’s sci-fi adventure flick “Ready Player One” nabbed the fourth spot and “Marionette” rounded out the top five in its debut weekend.

Directed by Lee Han-wook, “Marionette” is a crime thriller that explores the subjects of juvenile delinquency and child pornography, intersecting two dark issues that have made headlines in Korea over the past years.

Starring Lee You-young and Kim Hee-won, the movie revolves around a high school teacher (Lee) who was forced into taking part in child pornography when she was younger. The film shows the teacher as she experiences a string of events that are similar to her time in high school. Kim plays a former detective who helps out Lee’s character.

With the arrival of Marvel’s “Avengers: Infinity War” on Wednesday, the box office is highly likely to undergo a major shift this week. More than 700,000 tickets have already been reserved, according to Walt Disney Korea on Monday.