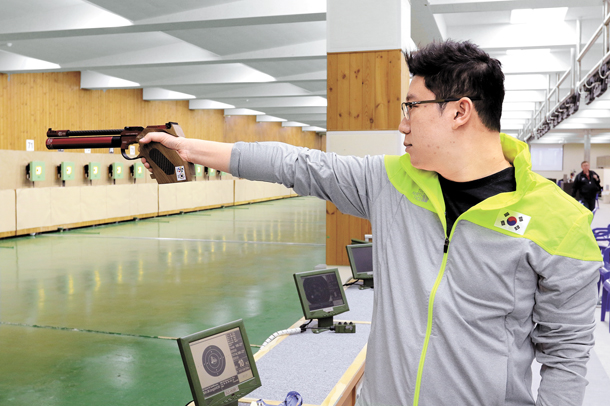 Jin Jong-oh, a four-time Olympic gold medalist, is considered one of Korea’s most decorated athletes, but there’s one thing that the great shooter hasn’t achieved - an individual gold medal at the Asian Games.

Jin, who has two silver medals from his four Summer Olympics appearances, said Tuesday that his goal for the 2018 Jakarta-Palembang Asian Games is to grab an individual gold. The 38-year-old has three Asian Games gold medals in his career, but all of them were from team events.

Jin could compete in the mixed team event with the Asian Games organizing committee’s decision, but for now, his younger teammate, Kim Cheong-yong, has earned a spot.

Jin, who also won three golds at the ISSF World Championships, fractured his ribs last winter while climbing a mountain. The injury is suspected to have affected Jin’s performance in recent competitions.

The double gold medalist at the 2012 London Olympics, however, vowed that he will regain his form to compete at the Asian Games and the ISSF World Championships, which will be held between Aug. 31 and Sept. 15 in Changwon, South Gyeongsang.

“I want to make an excuse that I couldn’t train for about a month due to injury,” Jin said with a smile. “Since we have the Asian Games and the World Championships, I’ll try to be fit and recover my form in upcoming competitions, such as the World Cup event in Germany.”