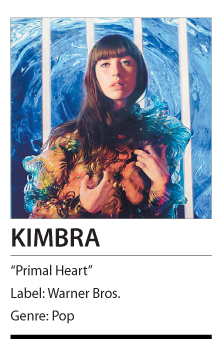 If there’s any musical justice, Kimbra’s third studio album should be the one that finally catapults the New Zealander to the acclaim she deserves.

On the 12-track “Primal Heart,” the multi-instrumentalist singer-songwriter shows off her impressive range, from glistening techno-pop to string-and-piano-fed torch songs to even a world beat-driven club banger.

Not familiar with the name? Born Kimbra Johnson, she already has two Grammy Awards, thanks to her monster collaboration on Gotye’s “Somebody That I Used to Know” in 2012. Six years later, she is someone you need to know.

She is joined by Skrillex for the high-energy, hypnotic “Top of the World,” which combines the current thirst for African rhythms with wonderfully bombastic lyrics (“You’ll see me gathering martyrs” and “Talk like I be the messiah”).

If that’s her on top, a few songs later she’ll be broken and beaten on the achingly intimate, stripped-down “Version of Me,” in which she wrestles with her faults and begs a lover to “stay for the person I’ll be.”