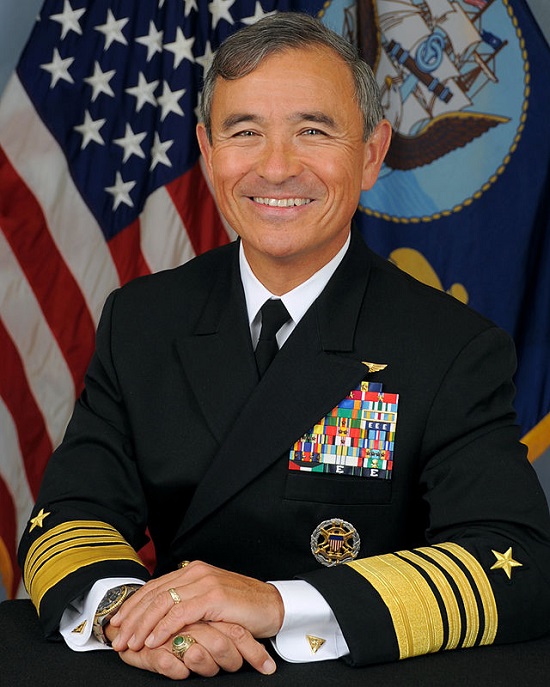 Adm. Harry Harris, the outgoing chief of the U.S. Pacific Command, is now the White House’s choice to become ambassador to Seoul, a long-vacant position, according to various officials Tuesday.

U.S. President Donald Trump named Harris, 61, as his ambassador to Australia on Feb. 9, and the Australian government approved the choice.

But according to the Washington Post Tuesday, a senior White House official confirmed that Harris was going to be nominated as top envoy to Seoul, and the Trump administration asked the Senate Foreign Relations Committee to postpone his confirmation hearing for the Canberra post, which had been scheduled for Tuesday.

Harris was said to have told Mike Pompeo, the director of the U.S. Central Intelligence Agency and Trump’s secretary of state nominee, that he is willing to serve as ambassador to South Korea, according to the White House official.

A spokesperson for the U.S. Senate Foreign Relations Chairman Bob Corker, Micah Johnson, confirmed to CNN that, at the request of the Trump administration, Harris’ confirmation hearing “has been postponed until early May.”

The post of U.S. ambassador to Seoul has been vacant for nearly a year since Mark Lippert, who served under the Barack Obama administration, stepped down in January 2017 with the inauguration of Trump.

Marc Knapper, the chargé d’affaires of the U.S. Embassy in Seoul, has served as the acting ambassador for the past 16 months.
Victor Cha, a former White House National Security Council and the Korea chair at the Center for Strategic and International Studies (CSIS), was Trump’s original pick for Seoul. Cha had been approved by the South Korean Ministry of Foreign Affairs but was abruptly dropped from consideration by the White House in January.

Australian Foreign Minister Julie Bishop said Wednesday that she was contacted by acting U.S. Secretary of State John Sullivan the previous day and was informed that “Harris was to be reassigned to another diplomatic post so his nomination process will not be going ahead this week,” and that she “understands” the decision by the White House to re-assign Harris.

She told Sky News Australia, “While we would have welcomed Harry Harris here to Australia, we understand there are challenges for the United States on the Korean Peninsula and my understanding is he will be reassigned to other duties.”

With 39 years in the Navy, Harris, a four-star admiral, was born in Yokosuka, Japan, to an American Naval officer and a Japanese mother. His father was a Korean War veteran.

He graduated from the U.S. Naval Academy in 1978 and held several other command assignments in the Navy, including with the U.S. Pacific Fleet and the Sixth Fleet. He became commander of the Pacific Command in May 2015 and had been set to retire next month.
He was the first Asian-American appointed to lead a combat command.

As head of the Pacific Command, he oversees about 375,000 military and civilian personnel, conducting operations in a region that spans more than 100 million square miles, or more than half the earth’s surface.

Among various medals and honors including the Defense Distinguished Service Medal, he is also a recipient of the prestigious Tongil National Defense Medal in 2014, the highest in the order of Korean national security merit citations, awarded to individuals who render distinguished service and meritorious contributions to the security of the Republic of Korea.

Harris was expected to easily gain confirmation in the U.S. Senate as ambassador to Australia.

During his confirmation hearing to be commander of the Pacific Command in 2014, Harris said that North Korea is the "most volatile and dangerous threat" in the region.

He also told the Senate Armed Services Committee that the United States does not have a so-called bloody nose strategy for a limited strike against North Korea.

“A diplomatic lever has to be applied first and a diplomatic lever is stronger, more effective, more powerful, if it’s backed by credible military power,” Harris said in a visit to South Korea in August 2017, amid heightened tensions because of North Korea’s provocations. “And that is what the Republic of Korea-U.S. alliance represents. It represents a very strong military backup to our diplomats who should take the front line, in my estimation.”