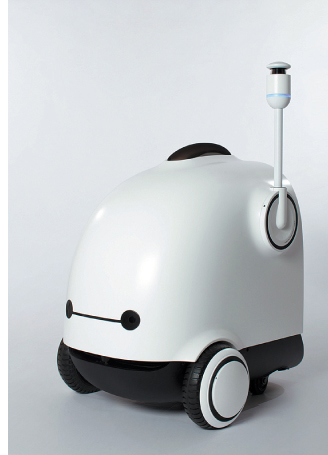 The company, also known as Baemin for short, announced Thursday that it has purchased convertible bonds issued by Bear Robotics for seed money. Co-founded last year by John Ha, a former Google engineer originally from Korea, Bear Robotics focuses on developing ways to apply robot and AI technology to restaurants.

Baemin said in a statement that the start-up’s capacity in robot development and the potential for future cooperation were the main reasons for the investment.

“The decision was made in accordance with [Baemin’s] mid- and long-term plan to grow into a leader of food-related robots,” said Oh Se-yoon, the company’s chief strategy officer. “We have high hopes that [the deal] will boost our existing robot business.”

The partnership with the U.S. start-up is also anticipated to give the local company more access to Silicon Valley’s latest robot technology.

Launched in 2011, Baemin is the leader in Korea’s delivery app market with a 50 percent share. Last month, the company announced it had finished its first prototype delivery robot, Dilly, which was the result of a joint project with Professor Chung Woo-jin of Korea University’s School of Mechanic Engineering.

The robot project itself is part of Baemin co-founder and CEO Kim Bong-jin’s vision for food tech. Since the company’s early days, Kim repeatedly emphasized that his company is not merely an app service provider, but a “food tech” start-up.

Bear Logistics has already launched its server robot Penny at CEO Ha’s Korean restaurant in California. During interviews with media outlets, Ha said Penny helps human servers focus on offering quality service to customers, while the robot is in charge of transferring dishes and bills.