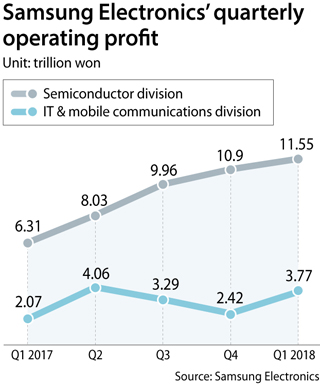 Samsung Electronics posted its best-ever quarterly operating profit for the fourth quarter in a row thanks to still-strong semiconductor sales and the early release of its Galaxy S9 smartphone series.

The tech giant on Thursday reported that its operating profit during the first three months of 2018 shot up 58.03 percent from a year earlier to 15.64 trillion won ($14.48 billion). Its revenue grew 19.82 percent to 60.56 trillion won over the same period. The company’s operating margin for the January-March period also increased by 6.2 percentage points on year to 25.8 percent.

The world’s No. 1 semiconductor producer raked in an operating margin on semiconductors of 55.6 percent for the first quarter, thanks to favorable market conditions and strong server demand. That’s higher than the 50.1 percent that SK Hynix, the country’s second-largest memory player, posted in the same quarter, when the company posted the second-best operating profit in its history and the highest operating margin.

First-quarter operating profits in the semiconductor division were 11.55 trillion won, up 45.4 from a year earlier, with revenue climbing 32.7 percent over the same time span to 20.78 trillion won.

“Significant earnings performance was driven by demand for memory chipsets for high value-added servers and graphics products,” said Samsung in a statement. “The System LSI and foundry businesses also contributed to first quarter earnings, backed by strong demand for chips used in smartphones and cryptocurrency mining.”

Samsung anticipates that the memory chip supercycle will continue this year.

“Despite general concerns over the market, the supply shortage will continue,” said Kim Woon-ho, an analyst with IBK Investment and Securities.

Samsung’s IT and mobile communications division, which is responsible for smartphones, tallied 3.77 trillion won in operating profits over the first quarter, up a whopping 82.1 percent year on year. Revenue grew by 21.1 percent to 28.45 trillion won.

“While the overall market demand for smartphones and tablets declined due to weak seasonality, Samsung’s smartphone shipments increased quarter on quarter due to the early release of the Galaxy S9 and S9+ as well as solid sales of the Galaxy S8,” the release said. “As a result of increased sales, which were mainly driven by premium models, the revenue and profit significantly increased both quarter on quarter and year on year.”

When asked by an analyst about the upcoming Galaxy Note9 phablet, slated to be released this fall, Yi said that the flagship’s key features will be upgraded and that its signature S Pen will have its functions enhanced to offer a “new experience” to consumers.

Yi said that Samsung’s development of flexile smartphones has been going on for the past several years in partnership with a variety of companies in different fields.

“We won’t just be focusing on being the first in the world, but on raising the level of perfection of the product and true value,” he said.

Although earnings were slightly down over the fiscal year as the division continues to restructure itself to focus on high-end products, Samsung maintained its lead in the premium TV market.

Samsung has a high market share for TVs priced above $2,500, which the company attributed to growing sales of its QLED and ultra-large-screen TVs. The company believes the market for pricey TVs will grow in 2018.

Samsung said its goals for the rest of 2018 are beefing up its premium product sales in advanced markets, reinforcing its business-to-business sales for built-in appliances and system air conditioners and enhancing online sales.